Sailor of the Unknown Tomb

The Veterans Group of Sonoma Valley will be holding a Memorial Day Observance on May 26 at 11 a.m. at the Sonoma Veterans Memorial Park. Ryan Lely

Americans have been fighting and dying in wars for longer than we’ve officially been commemorating them.
In 1868, just after the Civil War, Union General John Logan decreed that May 30 would be designated “for the purpose of strewing with flowers or otherwise decorating the graves of comrades who died in defense of their country during the late rebellion, and whose bodies now lie in almost every city, village, and hamlet churchyard in the land.” Decoration Day, as it was soon known, became Memorial Day by an act of Congress in 1971. Monday will see mourners laying flowers and flags across the nation, including Sonoma Veterans Memorial Park on First Street West.
But a witness to America’s first and founding conflict rests somewhere uphill from his later comrades. Two bronze plaques at the corner of Laurel Lane and Palm Drive in Sonoma’s Mountain Cemetery mark what may (or may not) be the approximate gravesite of Capt. William Smith – the only known Revolutionary War veteran buried in California. 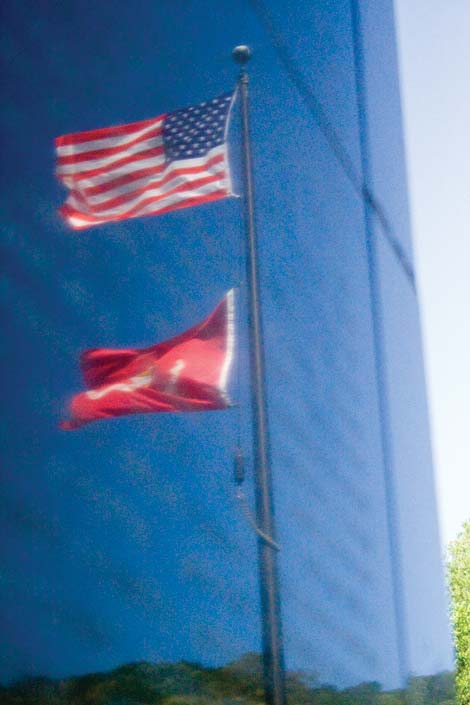 Smith was born Nov. 14, 1768 in Flowerdew Hundred, Va., one of the original James River plantations and today a national historical site. He died in Sonoma May 5, 1846 in the First Street East adobe of General Vallejo’s brother-in-law, Jacob P. Leese – ironically, about five weeks before the Bear Flag Revolt, when Sonoma was still part of Mexico.
What little is known of Smith’s life comes from letters and newspaper clippings gathered during an unsuccessful search for Smith’s exact gravesite by the Daughters of the American Revolution. Having joined the Virginia Navy at age 11, Smith served with his father in the ships Manly, Jefferson and Tarter and continued his seafaring after the Revolutionary War ended in 1783. Seven years later he had made 23 round-trip voyages to the West Indies before moving to Boston. He didn’t stay there very long, however; the next 20 years saw him making one China run and eight round-the-world voyages under the auspices of the Bryant and Sturgis Line, who held a near-monopoly on the California hide and tallow trade.
Smith reached the California coast in 1800, where he made the acquaintance of Captain George Vancouver, who explored the Pacific Coast from Oregon to Alaska. During the season of 1810—11, Smith sailed to Canton, China with a load of 63,000 seal and otter skins which he picked up from a station on the Farallon Islands. The next five years saw Smith engaged in the sandalwood trade between Hawaii and Southeast Asia, and by 1816 he was back in California as captain of the Albatross – and nearly arrested for smuggling in Santa Barbara. Somewhere in the Pacific Northwest the Albatross became shipwrecked, and Smith lost everything – including his journals. He was eventually rescued, and returned briefly to Boston in 1819 before settling in California. So well known was Smith on the West Coast that Bryant and Sturgis’ captains were ordered to look after the aging seaman and let him sail about as he wished, including an unsuccessful voyage to Boston in 1832 in search of surviving relatives.
Smith came to Sonoma in the 1840s. He spent his last days with his friend Jacob Leese. who notified the United States Consul in Monterey of Smith’s death in a quaintly handwritten letter dated May 8, 1846:
“The Night previous to his Death I discovered he was a loosing his Speech. I spoke to him and asked him if he has consulted with himself to leav this world. He said not, but said to me god bless you and all the children, and requested I should take care of him which was all and the last he spoke. […] I Enterd him with all the formalteys of his Church the (Episcopal) on the South Cide of the Sonoma Mountain North of the Town in a verry Noted Place.”
That place is now rumored to lie beneath one of Mountain Cemetery’s paved roadways, though two plaques (one installed in 1965 and the other in 1994) now commemorate Smith’s life. And though markers crumble and flowers fade, the memory of Smith and his fellow veterans – from Boston to Baghdad – will be with us each Memorial Day.