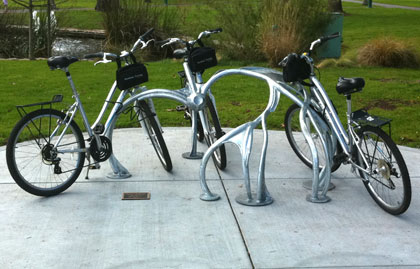 The cool new sculpture adjacent to the Plaza horseshoe is, in fact, a custom-designed bicycle rack commissioned by the City of Sonoma Cultural and Fine Arts Commission and created by local artist Bryan Tedrick. The sculpture bicycle rack is a result of the City’s combined interest in public art and the promotion of the use of bicycles.  The City Council adopted a Public Art program in March 2009 with a goal of helping “to guarantee the development of public art work as a whole in the City, ensuring a closer relationship between the landscape, buildings, community, and art.”  A couple of months later as the Council considered the Plaza Bicycle Parking Plan, which was an outcome of the Sonoma Bicycle and Pedestrian Master Plan, they suggested that a public art component be added to the plan, allocating funding for the project at the same time.

One thought on “New bike rack sculpture installed in Plaza”