(Steve Brunolli | Sun After Dark)
If you were around Murphy’s Irish Pub last Saturday evening, you probably noticed a cloud of laughter wafting from the Snug Room, and thought to yourself: “Gee, there must be something funny happening in there! I wonder what it could be.” And, more importantly, “Why wasn’t I invited?”

Well, put your curiosities to rest, because I was there, and I plan on spilling the beans. By the way, you were invited; you just didn’t know any better. 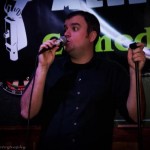 Late last year, Murphy’s allowed Torio Van Grol, a Sonoma State alum to book a couple of comedy/music shows, and, as it turns out, the comedy section proved to be a big hit. Fast forward to 2013 and Van Grol has partnered up with local favorites Lagunitas Brewing Co. to present Back Alley Comedy at Murphy’s.

“They’ve been a huge help. It’s fun to be working with people who’re interested in what I’m doing and whose beer I actually enjoy,” said Van Grol regarding Lagunitas’ involvement.

Now, we’ve all been to that local “comedy show,” the show that you go to only to laugh at that coworker you dislike who has the audacity to think he’s funny enough to perform in front of people. This is not that show. Rather, Van Grol has gone out of his way to book out-of-town comedians. Comedians with credentials.

Comedians that justify the promise ‘comedy’ in their title. However you want to phrase it, these people are funny.
The headliner for this last show, Will Franken, has won many awards across the Bay Area for his comedy and is a nationally recognized name.

That’s not to say, however, that the other comedians are but mere footnotes to the headliner. Van Grol, who opens every show with his own act, proved to be one of my favorite performers of the night, while the other acts, such as Chris Cruz, had the audience reeling with side-splitting yet poignant bits. These aren’t amateurs, folks.
Prior to the show, the crowd bustles in and takes their seat at any one of the many tables. I, personally, chose one of the longer, more crowded tables.

The ambience was that of a German beer hall, where strangers are encouraged to interact with each other while they wait for their drinks. Speaking of drinks: each ticket comes with a complimentary Lagunitas beer or well drink, and each of those complimentary drinks comes with a raffle ticket, with which one can win any number of assorted Lagunitas merchandise that is raffled off at the end of each show.

“If people keep coming out, I want to keep doing comedy and bringing in more outside people,” said Van Grol concerning the success of the night.

If “people coming out” is the only caveat to keeping Back Alley Comedy rolling, it seems we will be seeing a lot of comedy here in Sonoma. In each of his bookings, Van Grol has completely sold out of tickets, which equates to two fully packed shows in the Snug Room each night. For now, they are booked once a month through April, with some impressive lineups; however, if the turnout continues, we may see an increase in the number of shows, as well as some higher-profile names popping up.

Each installment of Back Alley Comedy starts at either 6 p.m. or 9 p.m. and generally lasts two hours. Tickets can be purchased online through Brownpaper Tickets for $25 a seat or directly from Murphy’s. The next show is Saturday, February 23 and features Alex Koll, Kenny Thomas and Nate Follen. Details.