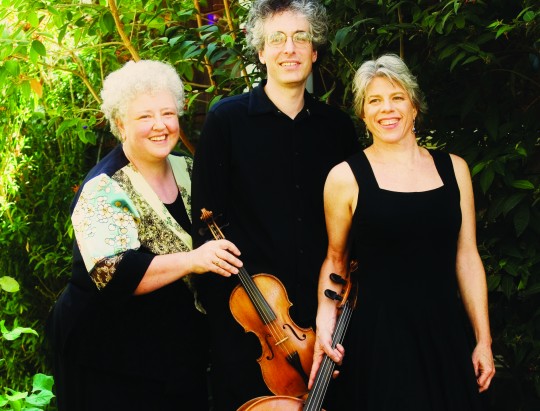 The Sonoma Classical Music Society will open its 12th season – four concerts at Vintage House — on Sunday, January 24, with The Benvenue Trio and Friends.

For a program of works by Robert Schumann, the ensemble of Tanya Tomkins on cello, Eric Zivian on piano, and internationally known Monica Huggett on violin, will be joined by Jodi Levitz, viola, and Carla Moore, violin.

On March 13, pianist Anastasia Dedik returns to Sonoma for an encore performance, a recital celebrating the release of her new CD. She will be performing works by Beethoven, Tchaikovsky-Pletnev, and Rachmaninov.

The Telegraph Quartet, headquartered in Berkeley and winners of the prestigious Bischoff String Quartet competition, makes its Sonoma debut on April 17. On the program: Mozart’s String Quartet K. 428, and the great “Death and the Maiden” quartet by Schubert.

The season concludes on May 15 with The Vinfera Trio, a local group based in Napa. Its Sonoma debut will include an eclectic mix of Francois Poulenc’s “Invitation to the Castle;” Mozart’s “Kegelstatt” Trio; Igor Stravinsky’s “A Soldiers Tale;” Bela Bartok’s “Contrasts;” and an arrangement of George Gershwin’s “An American in Paris.” The Trio is composed of violin/viola, clarinet, and piano.

Tickets for each concert are $35 for the general public, $30 for members of the Society, and $10 for students, at Sonomaclassical.org. More information will be released closer to each concert date.