By Fred Allebach | Special to The Sun

To conceptualize the shape and dynamics of the Sonoma Basin groundwater system, think of it as a large bath tub-like container (a basin) with the top plane angled from sea level up-valley. The basin has a bottom or floor, and is divided by clay, rock layers and tectonic faults. The basin might appear in three dimensions like the layers of a pound cake, with groundwater saturating the below-ground materials and sitting in between confined spaces or layers. Overall basin groundwater-holding capacity could be estimated (by an enterprising geologist) given the volume and spatial geometry. 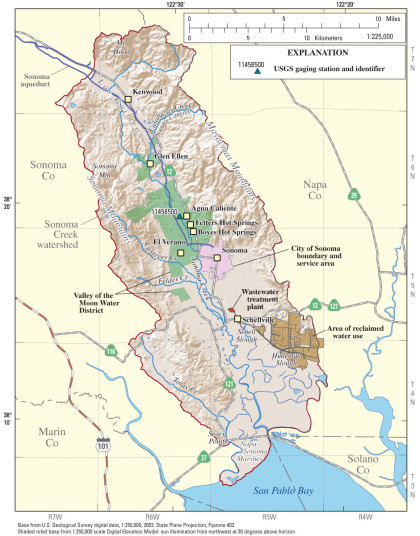 Water input comes from rain and mostly recharges into porous areas adjacent to the mountains. Recharging water fills the available basin groundwater spaces and then flows out. Surface and shallow aquifer water flows out to the sea via the Sonoma Creek trunk, while deep aquifer water (below sea level) stays more static and confined, under pressure of the weight of rock and sediment strata above. Basin-wide deep aquifer spaces take thousands of years to fill, at an unknown but likely quite slow infiltration rate, while the shallow aquifer spaces fill and flow through the system more quickly.

Head pressure from San Pablo Bay sea water pushes against the line of fresh water in the Sonoma Basin groundwater system. There is a surface aquifer, fluctuating line or boundary between Bay salty and basin fresh water. Depending on sea level, climate and amount of rainfall, the flow rate, levels of groundwater, and Bay salty water boundary in the basin, all change over time and seasonally. This would be a general picture of the natural basin, in its natural state, untouched by man. Untapped by any wells, and covered by forest and shrub ecosystems that would forestall evaporation, the basin hydrologic system would tend to be full and support stream flow.

Any discussion of aquifers and well pumping always has to define surface or deep aquifer context.

When wells get drilled aquifers can be drawn down. Surface aquifers, where groundwater is contained in porous sediments, recharge quickly with rain. Deep aquifers have a much slower recharge rate and in many cases, when drawn down, will not fill back up on a human time scale. The exact interconnections of shallow and deep aquifers in the basin, in many or most cases, are simply unknown. Yet interconnections do exist, otherwise deep aquifers would never have filled up. If deep wells do not fill back up on their own, then natural recharge is not happening at a scale that matters to human systems. Indeed, deep wells in the basin show a significant declining trend.

According to the USGS, “given the circumstances”, the current sampling of well waters, and also from previous USGS studies and SVGMP collected well water data, is adequate to give a general understanding of Sonoma Basin groundwater sources, flow and chemistry.

A critical issue for Sonoma basin groundwater is possible salty water intrusion into areas that have been over pumped. The way to measure saltiness is through electrical conductivity.  These measurements, for the purposes of Sonoma basin groundwater, are on a scale from fresh, to brackish, to saline, to seawater. The saltiness level pertains to how useful, or beneficial the water can be for human purposes, the more salty, the less useful.

Unfortunately for getting a read on south valley saltiness, Skaggs Island has no wells and south valley landowners refused to allow the USGS to sample their wells. There is a clear need for south valley monitoring wells. USGS said this would be “tremendously helpful”. It is likely that the SVGMP, or the coming Groundwater Sustainability Agency (GSA), will look into drilling monitoring wells in this area.

Assuming that all salty water must come from the Bay is analogous to only looking for evidence under the street light. From USGS and SVGMP findings, it turns out sources of salty water exist from sources beyond San Pablo Bay.

To arrive at measures of saltiness, the USGS took into account the source and geological context of the water, along with chemical markers. Newly recharged water, in surface aquifers, near mountain recharge zones has a chemistry more like rainwater. High sea water-type salinity water shows in surface aquifers from near the Bay. (A line of surface aquifer salty water, associated with a well pumping depression, extends in an arc up-valley to an area generally marked by Denmark and 8th Street East.) Deep groundwater is isolated by thick clay layers from direct infiltration by sea water. Deep aquifer groundwater is salty in some locations, particularly along the East Side fault, from contact with connate waters, and/or from contact and mixing with geothermal (thermal) waters. Thus, the more up-valley salty water is not from San Pablo Bay and sea water intrusion.

Deep aquifer waters are also associated with thermal waters that contain boron and arsenic. Many wells along the East Side fault have water that is not potable as a result of too high a content of boron and arsenic. However, to illustrate basin variability, the original Boyes Hot Springs came from a well at @ 70 some feet, which shows that thermal waters are not confined to deep aquifers.

Thermal water and geothermal processes are associated with Bay region plate tectonic activity. West of the San Andreas slip fault, the Pacific plate is moving to the northwest relative to the North American plate. Off Cape Mendocino (north of Ft. Bragg and south of Ferndale), the San Andreas slip fault meets the Juan de Fuca plate, which is subducting under the North American plate. This area is called the Mendocino Triple Junction. Juan de Fuca plate subduction is what feeds the Mt. Shasta and Lassen volcanic areas. Within the last few million years, this triple junction, dynamic geologic area used to be around here in the Bay Area. Now we are on the trailing edge of all these dynamic tectonic processes and hence we have local geothermal activity, (residual volcanic activity) as in for example, Boyes Hot Springs and the geysers.

The USGS dated groundwater for age by measuring for the hydrogen isotope tritium, carbon 14, and the ratio of oxygen isotopes 016 and 018. Most well water is identical to surface water by isotope ratio. General findings here; deeper well water is older well water. There has been some mixing of surface and deep aquifer waters which can indicate recharge in action, or possibly mixing as a result of multi-level screens connecting and mixing aquifer waters.

Said the USGS, if you’re pulling out deep aquifer groundwater that is 11,000 years old, then that’s how long it took to get it there in the first place.

Hydrogeology of the Sonoma Basin is marked by many particulars and specifics. Yet we are still capable of drawing larger patterns and seeing the forest from the trees.

Basin groundwater quality is determined by well depth and location. Basin groundwater is usually of good quality except near the East Side fault and in south valley surface aquifers. San Pablo Bay probably influence saltiness in shallow wells in the southern basin. There is a slight shift in higher salinity going up-valley towards Sonoma, mostly in mid-depth and deep wells along the East Side fault, and this is a result of mixing with connate and thermal waters, not sea water.

The Sonoma basin has two big groundwater pumping depression areas and other areas of concern. The two pumping depression areas are generally: 8th Street East and Denmark and the El Verano area near the golf course. Over-pumping changes groundwater gradient levels. When one gradient is lowered, water is pulled in from other areas. In the south valley surface aquifer, water pulled in is likely salty from San Pablo Bay. In valley areas adjacent to the East Side fault, in mid to deep aquifer wells, salty water pulled in is likely from areas that have connate and thermal water.

These areas will have to be addressed by the coming Groundwater Sustainability Agency mandated by the state’s Sustainable Groundwater Management Act (SGMA). An analysis of over-pumping and high salinity intrusion will be developed as part of the USGS final report.

One thought on “Sun In-Depth Report: Our Sonoma Basin Groundwater”