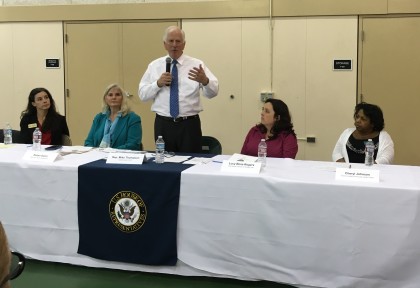 The Congressman told the enthusiastic crowd of about 350 at the Sonoma Valley High School Pavilion, the fifth such event around his district in two days, “You are the motivation of public policy,” congratulating their participation in “this exercise we call democracy.”

Thompson decried the executive order on immigration. Clearly supportive of local governments for their declarations of “sanctuary” and support of the undocumented in our communities, he spoke of the level of angst affecting children and adults.

He opposes ICE agents wearing “POLICE” in large letters on their uniforms.

Thompson mentioned a Santa Rosa friend, born in Cloverdale, who won’t leave home without her passport. He stated his full support for the “Dreamers,” and his opposition to the Wall, citing Mexico as one of our largest trading partners, and the farming community that straddles the border. “The immigration system is broken” and a wall, which will cost $ 24 – 40 million, will not repair it.

On the Republicans’ proposed repeal of the Affordable Care Act, the congressman said not only would it cause 24 million people to lose health care coverage but 3 million jobs would be lost, 350,000 in the state. And California would lose $20 billion – and there is no money in Sacramento to replace it for providing health care services.

Will he work with the new president? “I would be willing to work with anyone who addresses the infrastructure,” but he said Trump’s proposal so far is to give tax cuts to those who have built and will build such projects.

Thompson hammered on the fact that the so-called tax cuts are really “our money”, coming out of the general fund. He lamented the $667 billion cut to FEMA, reminding the crowd of the recent Lake county fire.

A veteran himself, Thompson affirmed the critical role of the state department in diplomacy, not war, and slammed as “short-sighted” the president’s budget which cuts the state department by 30 percent.   He called for “doubling down” on health research rather than cutting the National Institute of Health budget.

Thompson then invited those sharing the dais with him to speak. First was Sonoma mayor Rachel Hundley, who thanked the congressman for coming to Sonoma with a town meeting. She identified the work the city has upcoming: budget; planning, including the strategic plan, the General Plan and the Urban Growth Boundary; communication with citizens, which she hopes technology can improve; and housing, how to meet the needs of those priced out.

Supervisor Susan Gorin opened by acknowledging Thompson for being “very present, very responsive” in our community. She named the four areas that the county is focused on: strengthening the safety net; infrastructure, especially roads; housing for all; and declining groundwater.

The Board voted $2 million to address issues facing the immigrant community. Gorin spoke of calls they receive daily from undocumented who ask to be taken off the rolls for Health and Human Services benefits, for fear of being visible to immigration agents.

Lucy Benz-Rogers, immigration attorney placed by International Institute of the Bay Area at La Luz, echoed the importance of health services and education for all in our community. She affirmed the need for immigration law reform, citing the tremendous lag for visa applications to be reviewed, regularly 20+ years, in some cases as long as 100 years.

Cheryl Johnson, director of the Sonoma Valley Community Health Center, stressed the interrelatedness of the health, immigration and housing crises. She said that community health care countrywide faces a “funding cliff”: a 70 percent reduction in funding in October, with an anticipated $1.8 million loss to SVCHC.

Clinic clients are de-rolling from MediCal to be less exposed to the risk of deportation. She reminded that anxiety and fear lead to physical illness.

Congressman Thompson then responded to written questions from the audience. Asked whether he would introduce legislation to change immigration law, he described the failed attempt by a caucus of representatives to introduce piece-meal reforms.

He vigorously supports an independent investigation of foreign involvement in the election. He affirmed his opposition to any cuts to Planned Parenthood.

He affirmed his support for universal health care, reminding the crowd he was a leader behind the “public option” in the ACA which, even with a Democratic congress failed to pass.

To a long round of applause Thompson closed the evening urging the crowd to “stay in touch, keep the faith in what you believe in; and stand up and speak out.”