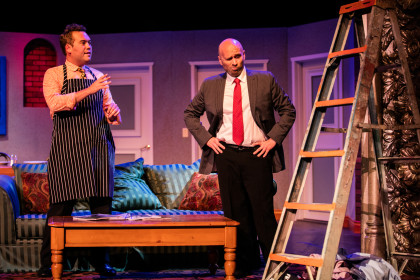 Playwright James Jandak Wood recalls an exhibition at the San Francisco Museum of Art, specifically a piece consisting of a single, lit light bulb. Is it art? To the curator, obviously it’s great art, Wood thought. To others, perhaps not.

And then it clicked.

“It led me to thinking how brazen artists can be in defining art,” he says now. “But surely some artists — many artists — hide their work fearing criticism. And of course, we all hide parts of ourselves — our actions, our beliefs — fearing criticism.”

The thoughts sparked by that single light bulb lead to Wood’s latest play, “The Chaotic Art of Life,” running now at Sonoma’s Andrews Hall. The world premiere production, which Wood directs for Sonoma Arts Live, plays its final weekend May 4-7.

Wood authored “A Modern Encounter,” which was performed on the SAL stage in 2015.

“When James gave me this new play to read, I couldn’t put it down,” says Sonoma Arts Live Executive Artistic Director Jaime Love. “The witty, educated dialogue just leapt off the page. It felt like it had been written by Neil Simon’s hipper, edgier, little brother. I’m very excited to be premiering this work on our stage.”

The story follows two brothers, Manhattan roommates. One brings home a piece of art he revers; the other sees only a ladder in the middle of his living room. Their debate quickly degenerates from the intellectual to the personal, and grows to color other relationships.

In “The Chaotic Art of Life”, Evan is a copy editor for a small underground newspaper. His brother Mark is an employee at an art gallery. When he brings home an art object titled “The Fractal Dissonance of Clothing with Ladder” and installs it in the middle of the living room, their tense relationship erupts into open hostility.

When a young, daring, outrageous fashion design student becomes their roommate, and their mother outstays her welcome, the two men must confront their inhibitions about art, and therefore, in Wood’s construct, life itself.

Love says Wood and the company have brought together an A-list cast of actors from across the country to ‘Chaotic’ to life.

Andrew Ravani (who plays older brother Evan) is a drama graduate from San Francisco State and the British American Drama Academy at Oxford. He teaches theater in Santa Rosa. 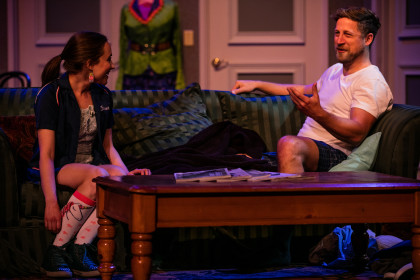 Ben Diserens (younger brother Mark) is a resident of Los Angeles, a graduate of Fordham University’s Theater program, and has worked with Upright Citizens Brigade Improv. His credits include “The Tonight Show Starring Jimmy Fallon.”

Jennifer Peck (Mother Dyanne) is familiar to Sonoma Arts Live audiences from “Jake’s Women” and “Same Time Next Year.” She studied at the American Conservatory Theatre in San Francisco, Tisch School of the Arts in New York City, and the Lee Strasberg Theatre Institute in New York and Los Angeles. Film and television roles include Woody Allen’s “Blue Jasmine” with Cate Blanchett and “San Andreas” with Dwayne “The Rock” Johnson. 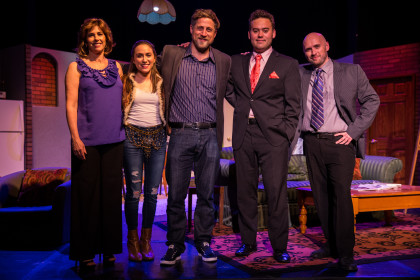 Melissa Claire, SFBATCC Best Costume Design award winner for “Return to the Forbidden Planet” in 2014, lends her talents to the show – with a creative and stylish eye especially for fashion design student, Julie. Melissa’s pieces have also been displayed at the Houston Museum of Contemporary Craft, Saks Fifth Avenue, and on Good Morning America.

Top: Mark (Ben Diserens) and Paul (Matthew Lowenstein) contemplate the art work — or is it a merely a ladder?