Submission Guidelines
The Sun welcomes your work. Find out how to submit to Deb Carlen, Creative Arts editor

“Woolgathering” — fiction by Todd Board 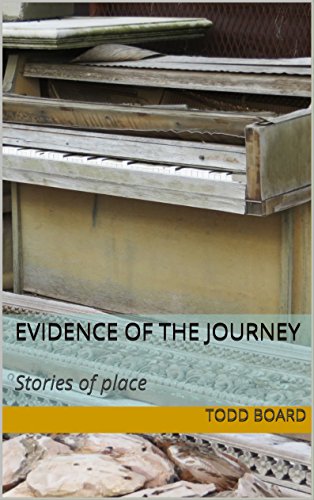 By Todd Board, excerpt from “Woolgathering,” from story collection “Evidence of the Journey.”

In the high, creaky, rambling voice of a wiry, aging male of the species.

I live on the border between the old and the new, with views to the valleys of both. I guess you could fairly say that.

Looking toward sunup, you can see the green irrigated valleys at the western limits of the grey and brown “great basin” as they call it, down over there in Nevada. You can see where the big nearby ranges gradually fade away into those littler islands of hazy mountaintops off into the distance, into what seems like forever on a clear day. It’s easy to imagine ghosts of a grainy black-and-white past roaming those dry lonely places, over and over like one of those old films that repeat the same short, jerky clip where you can practically see the string holding the images together. The head of the wagon train is destined to climb to the swell of a near pass, only to see higher mountains to cross as winter fast approaches – again, and again, and again. The people who got their land and lives taken from ‘em through empty promises and the prodding of a loud, deadly stick – well, they keep hoping for something better than that, while fearing for the worst they actually get, because in the end they don’t have much choice. It’s an old story I suppose, but it always seems new when it happens to a group of people for the first time. It seems like a painful way to learn about the past, especially if that past might be your own future, but there it is regardless.

Looking toward sunset, you can see what the world’s becoming, whether you like it or not. California stretches from Asia to Nevada, just a few miles downhill from here, with a big wet spot in the middle. It’s the best and worst of America, just like America’s the best and the worst of the world. In lots of other places, for instance toward sunup, people care a great deal about their own rights, maybe at least as much as they care about others’ rights. Toward California’s sunset, though, you get more people who care about their own rights, and everybody else’s, too. That sounds nice in theory, but what it actually means is a lot more rights to keep up with. Off past the ranges just to the west, you can almost see the arguing about people rights, like a big smoggy cloud. Just like the old debates about water rights in this dry land, which aren’t solved yet, probably never will be. When you load infinite rights on the back of limited water, in the end nobody gets enough to drink. This seems obvious, but then it surprises a lot of people who have their eyes on some bright horizon, and don’t see their feet mired in horse apples down on life’s messy trail.

I haven’t always been a sheepherder, though I grew up around it in this area. In one earlier job years ago, back when I was married, I was a school bus driver down in Reno. I can tell you, that posed some memorable challenges, and overall the herding was more difficult than with sheep. You can imagine how ridiculous it can be sometimes to be a school bus driver in a casino town, any of ‘em. I heard somebody once describe Portland, Oregon as the place where young people go to retire – well, casino towns are where the retired go to re-live their childhoods, at least the ones they wish they’d had.

There were times I’d look at the rearview mirror and watch some of the bus kids watching the town roll by outside. They’re looking at bleary-eyed people shuffling off to get some sleep at the same time kids are going to school. They’re looking at these monster campers with tiny vehicles hooked on behind like little dingleberries, going so slow you’d swear they’re going backwards, like they pretty much have to stop at every gas station they pass just to fill up again. They’re seeing the socks reaching nearly up to some people’s varicose knees, and the cigarettes with ash so long it looks like the worst, most boring magic trick you could possibly imagine. And you know the kids are thinking this is what I have to look forward to, and how exactly does this relate to my geometry homework? Once I saw a kid just put his head down on the back of the seat in front of him, and shake his head a few times. I figured he was just realizing not all rainbows have a pot of gold at the end, especially not the neon type – some just have a pot of lipstick-smeared cigarette butts, and ATM withdrawal slips.

Todd Board’s “Evidence of the Journey” is available on Amazon, and at Readers’ Books and Copperfield’s Montgomery Village. “Each story exquisitely melds humor with paintings of memorable landscapes of nature… Masterfully welded with his perceptions of often-ignored issues in today’s society…” – Red City Review (4 stars)