Dr. B.J. Bischoff is the owner of Bischoff Performance Improvement Consulting, a Sonoma firm specializing in building the capacity of nonprofit organizations and public sector agencies to better serve their stakeholders. She assists her clients with strategic planning, training resulting in performance improvement, fund development, and community relations. She is Past President of Impact100 Sonoma and serves as a Sonoma County Board of Supervisors’ appointee to the Sonoma County Portfolio of Model Upstream Programs Review Committee. Contact her at [email protected]

It’s been a somber and stressful two weeks here in Sonoma Valley. Everyone I know knows someone who has lost everything in the wildfires that started October 8 and blazed for over a week. The Nuns Fire (and Partrick Fire, which merged with it) is the one that hit Sonoma Valley, scorching over 56,000 acres and leaving a path of destruction and countless numbers of newly homeless neighbors in Sonoma, Glen Ellen, and Kenwood. Alex Young, the geographical information systems manager at the Sonoma Ecology Center, calculates that 28.5 percent of Sonoma Valley has been burned.

What’s so amazing is, within hours of this unfolding tragedy, Sonoma Valley residents sprang into action, volunteering to do whatever they could to help. It’s called Spontaneous Unaffiliated Volunteering (SUV) and it happens when individual community members who are not connected with a particular nonprofit organization apply their unique skills to help during an emergency because the need is so compelling and they feel motivated to simply help. 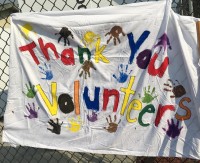 These SUVs may volunteer on their own, band with other SUVs, or join the efforts of a nonprofit organization that mobilizes resources to respond to the disaster. Spontaneous volunteering is on the rise as a way for community members to offer their services during times of disaster. Research indicates that while emergency services agencies are experiencing a decline in regular committed volunteers, they are seeing an uptick in spontaneous, event-driven volunteering.

Sarah Stierch, Sonoma-based writer, is a prime example of an SUV. She posted her first tweet on Twitter about smelling smoke at 4:11 a.m. Monday morning, October 9. This tweet proved to be the first of over 1,500 tweets keeping community members accurately informed of where the fires were, what they had destroyed, and when it was time to evacuate. She volunteered at least 18 hours per day in the week following the fire outbreak. According to Tom Wark of the daily wine blog Fermentation, “Sarah Stierch… set out on what has and continues to be a heroic effort to keep her community members informed during what is surely the most trying moments of their lives.”

Also within hours of the first fire outbreak, the Rotary Club of Sonoma Valley took its motto of “Service Over Self” to heart and became the go-to organization for providing food and basic necessities to fire victims, evacuees and first responders. According to Rotary’s website, “Since those early hours, Rotary has helped to facilitate the donation, preparation and delivery of (over)10,000 meals, mostly to first responders while they fight to protect people and their homes all over Sonoma Valley. Rotary is facilitating the collection, organization, and distribution of basic necessities pouring in from all over the state, getting help to those who need it, where they need it, when they need it.”

The Rotary Club partnered with The Red Grape and Suite D as food distribution hubs, where over 40 restaurants and chefs prepared and delivered meals that were then dispatched to first responders and fire fighters at four fire stations, Sonoma Valley Police Station, and Fire Strike Stations and fire evacuees at Sonoma Valley High School, Best Western Sonoma Valley Inn & Krug Event Center, and La Luz Center (See the sidebar list of businesses that provided up to 2,000 donated meals per day.)

La Luz Center opened its doors as a distribution center and partnered with Rotary to distribute food and supplies to evacuees and fire victims. And FISH also got involved distributing food and supplies. Through these efforts, many community members who aren’t Rotarians or regular La Luz or FISH volunteers have become spontaneous volunteers and are helping distribute food and needed supplies. Many more nonprofit organizations stepped into action, including Teen Services Sonoma, which offered its commercial kitchen, shower, washer and dryer, bicycles, and a large passenger van to the community.

Qualified psychologists applied their professional skills to conduct free mental health and grief counseling. Trained, licensed massage therapists volunteered to provide massages for first responders. Random community members went to grocery stores to purchase meat to be served to first responders when the chefs at the front line food trucks ran out of supplies. Tasting rooms offered free tastings and businesses offered discounts. Sheana Davis of the Epicurian Connection and husband Ben Sessions opened the No Pay Cafe at the Sonoma Springs Community Hall. There, they and fellow volunteer community members provided meals and critical donated supplies for those impacted by the fires.

A community’s disaster preparedness planning should include protocols for how to manage spontaneous unaffiliated volunteers during a crisis. A study sponsored by the UPS Foundation recommended that communities take steps that include (1) forming a community-based Volunteer Coordination Team to manage the function of SUVs; (2) identifying and building cooperative relationships with first responder organizations to identify needs and with organizations such as schools, nonprofits, and faith-based organizations that could provide spontaneous volunteers; (3) establishing a Volunteer Reception Center (VRC) where large numbers of volunteers can be efficiently processed and referred to organizations in need of services; (4) creating VRC “Go Kits” with information, forms, and instructions for each volunteer; (5) designating an entity to manage groups of unaffiliated volunteers; (6) conducting training and exercises; and (7) developing communication tools.

If you are unable to offer your time and talent as a spontaneous volunteer during this time of great need, please consider offering your treasure via a monetary donation to one of the nonprofit organizations collecting funds for fire relief. A few of the local fire relief funds include #Sonoma Strong, managed by the Rotary Club of Sonoma Valley; Sonoma County Resilience Fund, managed by Community Foundation Sonoma County; and North Bay Fire Relief, operated by Redwood Credit Union, The Press Democrat, and Senator Mike McGuire.

No article about these disastrous fires would be complete without mentioning our community’s gratitude for the courage shown by thousands of volunteer and paid firefighters and other first responders who bravely and strategically fought the horrific fires. Now that the first responders have saved our Valley, it’s up to the rest of us to continue volunteering to help Sonoma Valley heal and rebuild. Our volunteers make us Sonoma Strong.

*Thanks to Sondra Bernstein, founder of the girl & the fig, LLC, for providing most of the names on this list.

Apologies to any business inadvertently omitted from this list.

One thought on “Volunteers make us Sonoma Strong”