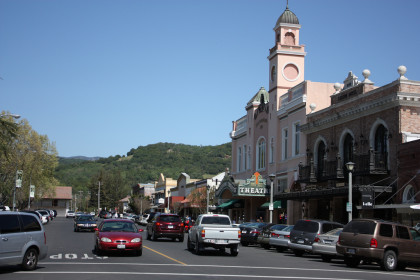 The streets surrounding Sonoma Plaza have long functioned like alleyways in a parking lot, but that “parking lot” is now woefully insufficient. Despite this, developers keep bringing forth plans that will make matters worse, driving downtown visitors and business employees ever deeper into the residential area streets surrounding the Plaza. The creation of truck delivery lanes in the middle of the block has further exacerbated an already congested situation and increased the potential for pedestrian injury. The big rigs make it difficult to see, and navigating between them and parked cars further obstruct the flow around the Plaza.

Even if one accepts that Plaza streets are merely alleyways in a parking lot, who designs a parking lot that includes big rigs?

This situation has been brewing for a long-time and despite certainty that it will get worse, no plans for a meaningful solution have been proposed. Unfortunately, past opportunities are now lost. Sonoma could have created a Downtown Parking District with tax and bond authority; if created 30 years ago by now it might have revenue available for some creative and meaningful solutions. Regretfully, such a district was never created and Sonoma has squandered the revenue potential of the past 30 years.

The Casa Grande lot (to the north of the Plaza) is owned by the State of California, which in the past has leased that lot to the City of Sonoma. At present, the lease has lapsed; negotiations with the State are ongoing and the outcome is unknown. The Casa Grande parking lot was originally intended to accommodate parking for visitors to the State Parks property fronting the Plaza; it was never built with the intention of satisfying the public parking needs of downtown Sonoma.

Every study done of Plaza parking over the past 30 years has documented that 50 percent of the parking spaces are occupied by employees of Plaza businesses. This naturally raises some red flags, but also the question that if not in Plaza parking spaces, where will Plaza employees park? The answer is obvious; employees will park on neighborhood streets where they are not limited to three hours, and that’s exactly what many of them do. Thus not only the Plaza, but the surrounding residential streets are becoming parking lots.

Let’s imagine a solution for a moment: an underground parking structure with two stories above ground south of the Plaza. Imagine if the City could cut a deal with the U.S. Postal Service to create a parking structure that would also house the Post Office. The parcel on which the Downtown Post Office sits is large, fronts two streets, and the combination of an underground level combined with a two-story above ground facility would capture cars before they reach the Plaza. Parking fees (lower for residents than non-residents) could finance the project over the long-term and could be used to pay-off 25-year construction bonds. Combine this plan with the possibility of a Downtown Parking District (generating revenue though development fees and Use-Permit regulations) and it might be possible to pull it off–not immediately, but soon enough to help forestall constant gridlock and monopolizing local neighborhood parking with Plaza overflow.

If not the Post Office, perhaps another suitable site can be found. One thing is for certain: unless the City of Sonoma gets serious and creative about addressing this problem, we’ll have created a parking puzzle that can’t be solved.