Under the Sun: William Murray, photo chronicler of Valley life 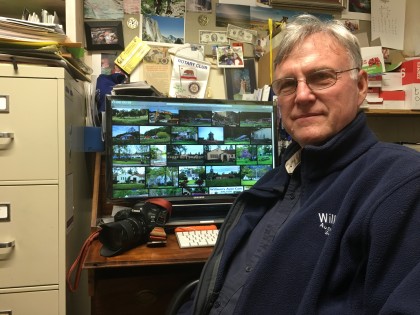 Your photography of the October fires has drawn sensational numbers of views.   Yes, over three million pictures viewed in the last twelve months. My site, Sonomaslife.com, has a life of its own. I’ve never advertised it.

How many pictures usually get viewed, in a normal year?

How were you able to get those amazing photos of the fires, especially in Glen Ellen?

I live in Glen Ellen, near the heart of the fires there. We were evacuated Sunday night. I looked up what was required for a press pass, and when I couldn’t find anything, I just packed up an issue of the Sun with a photo by me on the cover, and a copy of Valley of the Moon magazine with photos I had taken, and in I went with my camera. And because I could get in, I could text my neighbors later to let them know their houses were safe.

And you posted all the photos.

Yes. And I shot a video on Warm Springs Road that the Rotary Club used to raise money for fire victims. I’m a member of Rotary, and I had seen a presentation the month before by the Lake County Rotary, on how a video had helped them raise money for fire relief. Our club raised well over $1,000,000 in a few days with my video.

You are a man of few words but many photos. Just how many?

How many years have you been photographing local events?

About the last 10 years. Since I had a digital camera.

Why did you start taking these pictures?

I was thinking that you always see photographers at events, but rarely get to see the pictures they take. Maybe one, or occasionally a few. People like to see them. They like to see themselves. And they can download them. They’re all free. It’s a little advertising for my auto repair business in Boyes Springs.

This has become kind of a passion. How much time do you devote to it?

It could be four to five hours at the event, then another four or five editing and posting.

Your pictures have been an important resource for many nonprofit fundraising events.

Yes, La Luz for one has made good use of them. Their colorful events are highly photogenic. And people who were there seem to enjoy looking up themselves and their friends afterwards. I’ve shot the Boys and Girls Club Sweetheart Auction for years too, and the Sonoma Raceway. Red and White Ball. Cowboy Cab.

What other events have you covered?

You mentioned the Sun, and Valley of the Moon magazine. Have your photos appeared anywhere else?

A long time ago. When I was in college, a photo I took of shorebirds at sunset on Bolinas lagoon was the cover of the Sierra Club magazine. And some photos I took in ’69 in the oil fields in Alaska ended up in an ad that ran in both Time and Life. I actually came across some of those Alaska photos of mine not long ago in an Atlantic Richfield exhibition at an automotive trade show.

You’re in Rotary. Any other community activities?

I’m in Native Sons of the Golden West, and the Chamber of Commerce. And I served on the Redevelopment Advisory Committee. In fact, I was chair of the RAC when Governor Brown pulled all the funds.

This photo chronicling is a labor of love.

I love Sonoma, the people and the place.