What we learned: fire, forests and the future 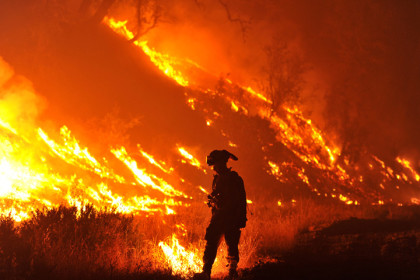 Exactly one year after devastating wildfires broke out in Sonoma Valley and around the North Bay, locals will get a chance to reflect on that experience – and learn how to adapt to the fire-prone environment – at an exclusive film screening and panel discussion Monday, October 8, at Sebastiani Theater.

“Wilder Than Wild” is a one-hour documentary by filmmaker Kevin White. It will be followed by a panel of experts, along with White and the film’s producer, moderated by NBC’s Doug McConnell.

The event is presented by the Sonoma Ecology Center in acknowledgement of the fires of October 2017.

“Uncontrollable wildfire is already coming a regular part of our lives in California,” said Richard Dale, the Center’s executive director. “Change only comes through understanding, and this movie helps get us there.”

The panel will be moderated by Bay Area outdoorsman Doug McConnell, former host of “Bay Area Backroads” and currently the host of NBC’s “OpenRoad.”

The film examines how prescribed fire can reduce the need for fire suppression. It looks at a California tribe renewing its tradition of cultural fire, and shows how scientists, resource managers and others are coping with the emerging challenges of land management.

“‘Wilder Than Wild’ explores these facets, which is why we’re so glad to present it to the public,” Dale said,

‘The film starts at 7 p.m., with light refreshments and wine served at 6 p.m. $20 suggested donation at the door or wtwsonoma.brownpapertickets.com

For more on how Sonoma Ecology Center is honoring the one-year anniversary of the North Bay fires, go to www.sonomaecologycenter.org/fire-anniversary.