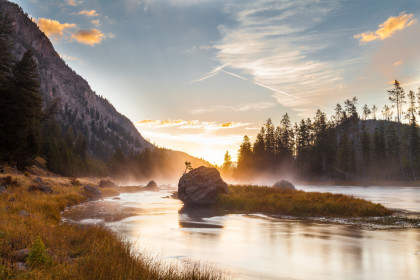 Holding power is a huge part of politics if not the central thing, and once the threshold of power has been reached, those who arrive are loath to let go. One might even say the obsession with political power, to impose one’s will on others, is akin to the type of dominance behavior we see in our primate cousins. Dominate, control, master public resources, put your guys in to positions of power; it’s an intoxicating brew.

Part of the deal is to gain the power; another part is to prevent others from getting it or exercising it. This is all quite obvious in national politics, particularly with the Wisconsin Republican legislature disempowering the new Democratic governor and attorney general, and with the flat out unethical cronyism, and unsustainable natural resource exploitation of Trump Republicanism.

Winning and keeping power, to control the flow of benefits and resources, to control outcomes, is the prime objective. Unfortunately for the public, the current Republican trend is to concentrate power at the very top, while fooling and bamboozling the base, that their “populist”, mundane, everyday interests are being taken care of.

A critical part of the deal here is the story we buy into, the narrative. Getting people to believe and to vote one way or another is critical. Once people buy in, the framing of facts and concomitant merits are then set. The story as I see it, is Wall Street vs. Main Street, Republicans vs, Democrats. The story as Republicans see it, is with liberal elites and government bureaucracy as the boogie man. Essentially the stories boil down to what actors are seen as evil, and who is good and righteous: private or public, pick your savior, pick your poison.

In the US, there has been a notion and expectation of democracy. If you win the election, that is fair, that is the voice of the people; and since we all essentially share the same values… the vote is to be honored. This kind of “we’re all in it together” view may be naïve now. In a flat-out Machiavellian, McConnell/ North Carolina/ Wisconsin strategy kind of way, if you can’t win with the popular vote, then buy it, limit it, and frustrate the vote of the majority through gerrymandering, voter suppression, and even last-minute sour grapes legislative gutting of power for the popular vote victors.

We can be sure that big money interests will come out here in our city and county, to fight for control, just as they did at the state level, to spend $70 million to defeat the Prop 10 rent control measure. Keeping the faucet open to keep fleecing the little guy is a prime Republican, business interest objective.

This is bloodthirsty stuff. There’s little pretense of democracy nationally now. We’ve turned to tribes ready to kill each other. We would be naïve to think the exact same dynamics were and are not at play right here in “our little town” and in our county and region. And so, in Sonoma, the right wingers and libertarians lost, their hardball tactics failed, and now we have a possible three-vote liberal majority on the city council.

From where I stand, this is absolutely great! I love it. National politics has devolved into a mafia of lies, murders, strong men, and ape-like dominance, but locally there is now reason for hope. Locally, three votes is all you need to know about how any policy will go. And if those three votes are smart, confident, and willing, they tell city staff what to do, rather than staff being part-ways an Iron Triangle agent for business as usual. Business as usual is dominance and control by the big money Alpha males.

Move over Rover, there’s a new Sheriff in town. Mayor Amy Harrington. Got to like the sound of that!

With liberals, the hope is that the little guy’s interests will rise to the top, and gain an equal footing with the already dominant business and 1% economic interests that lurk in the collective political forest. These financially dominant Alphas are used to calling all the shots. But, they have been frustrated as of late by who they call a “vocal minority”, of others who would pretend to the throne of local power and control.

Sonoma is a limited commodity, and for its glory and spoils, big economic actors want to exploit it and drain out more money. Competing with said business interests, are homeowners who want that draining out of value and atmosphere, that character, to stay the way it was when they bought in, to have it not be cheapened by crass commercialization. They want their property values to keep going up and up and up. Both business and homeowner interests are fighting for the same prize, and both are fundamentally at odds with renter interests, the actual little guys on the block; these are the same little guys that Republicans go to great lengths to disenfranchise and make sure they don’t get any of the gravy. To a great extent, the Bay Area landed and the Sonoma landed, are essentially the same as Republicans when it comes to how much they are willing to do for the little guys. They’ll make poor renters sandwiches all day long, but won’t let them live next door, or pay them the higher wages it takes to be full-fledged community members.

This brings me back to the new city council. Local conservatives, big shot money guys, real estate speculators, and liberal homeowners are all likely nervous, because the actual votes have now panned out democratically to favor more actual liberal positions, like high density, integrated infill. These council members can talk about and vote for social equity, talk about and vote for real climate mitigation, real sustainability. They can voice values others ignore when they say “just let the market take care of it.” They can vote for inclusive policies; they can appeal Planning Commission decisions if they don’t like them.

In this regard, in lieu of real sustainability, economic actors could be partners, in a plan for the benefit of all. We don’t have to recap national dysfunction. What remains to be seen, is if the economic guys are going to cooperate or to fight, to resist, and play power ball, try to weather two years and then try to get three votes back in 2020. What remains to be seen is if these three votes will have the chutzpah to exercise power that will conform with their sustainability values, ethics and morals. A way will have to be found here, to reframe town and valley economic policy, to at once include, honor and harness economic actors for the greater good, and show them this can be done in a planned, inclusive way.

The new council majority may break sometimes. They have a good balance of pragmatism and idealism. I think they are going to be great.

This is all a good challenge. Any whole society needs job creators. To get job creators on board with an equity focus is the challenge, to help them serve all interests. A whole society needs its workforce to be treated right, needs its environment to not be degraded, needs the whole system to be healthy, to keep everyone and everything rolling. Maybe all partisan, dominance-focused actors need to get ideological shock treatment, so all can come to the table with a fresh eye towards creating an adaptive Sonoma, one not mired in constant internecine war. Maybe people who can articulate the whys and hows, can be persuasive.

It may be that the new council majority has to disappoint their more liberal base by working with the money guys, and showing that in order to be a whole human system here, we need the inclusion and cooperation of all. The new majority may have to stand up to homeowners and as well. We need to break the zero-sum game fever dream of flat out, unlimited commercialization vs. NIMBYs, where the workers and renters just try for a few crumbs after the fight is done. The one hope is that those who have been disappointed, exploited, and mistreated at least rise to an equal level.

The preferred strategy is inclusion, show all stakeholders they have a place, and articulate it in a way that gives hope and makes sense, and give us a break from the national insanity and endless bad news of one corrupt, unethical, unsustainable thing after another. Give us a point of light here!

If the business-as-usual powers that be don’t want to play nice and cooperate, well, we are likely looking at four years of a liberal majority. If Amy runs in 2020, she’ll win; she’s tough and good campaigner. This is all reason for local hope. Four years is enough time to weather any spate of revenge appeals and lawsuits, and to prevail in creating a just and sustainable society. I can’t think of anything better to help me sleep at night.