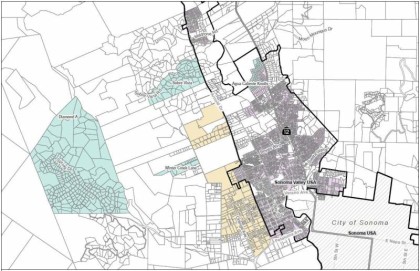 From DWR website: “The DAC Mapping Tool is an interactive map application that allows users to overlay the following 3 US Census geographies as separate data layers:

“Other Geographic Information Systems (GIS) layers relevant to the IRWM Grant Program are also shown on the map. All GIS layers can be toggled on and off while varying each layer’s transparency. Each map layer includes a brief description and a location or source where the user can find additional information regarding that layer.”

DAC mapping tool US Census Block Groups overlay  (MHI = state median household income, US Census 2010 – 2014; all are unincorporated except where noted in city of Sonoma)

I am assuming, reasonably I believe, that housing is an aggregating indicator for wages, health and education. By focusing on housing opportunity, or deficit, other human system factors are dragged along in the mix. Housing is thus a prime indicator, and when housing is addressed, other corollary issues are addressed as well. The current housing crisis demands action now; AMI people need help now, not in three years or five years; a certain amount of bold action is called for.

Aggregate annual income deficiencies, and issues of systemic poverty in the Springs area have been shown and illustrated in the Portrait of Sonoma County and the Hidden in Plain Sight study. The Springs Specific Plan is one bright spot; credit to Susan Gorin for her work in making it happen. Hopefully Permit Sonoma and other SSP decision makers will hold on for as much high density infill as possible, and hopefully the units won’t all end up as 350 square foot stalls.

A strong case can be made that the Springs Area as a whole is at or near SDAC MHI levels. DWR Census data is from 2010-2014. Current Sonoma County Economic Development Board stats, from the Sonoma Valley Community Profile, 2017 Demographics Report, show that over 32% of Springs Area households make less than $35,000 per year. That is SDAC level poverty.

The US Census-based Portrait of Sonoma County shows that 25.3% of individuals in the Springs Community Census Tract have annual incomes below poverty level. See the Springs priority area in the latter Portrait link. There are pockets of Mississippi-level poverty right here in Sonoma Valley, right next to Sonoma’s opulent wealth.

If current DAC mapping tool numbers are inaccurate and Sonoma Valley can be shown to actually have many SDACs, this could result in state and federal funding opportunities to address regional poverty issues with housing and public services. Post-fire, there will be some money coming from the state, to be administered by the county Community Development Commission, but this money is not enough, for example, to build 50 units of AMI (Area Median Income) affordable housing, not even close.

Annual median household income in Sonoma Valley, in the current DWR-classed DAC areas is just above SDAC levels anyway. Post-fire, there is a good chance that the Temelec, El Verano, Fetter’s Hot Springs, and all three Boyes Hot Springs Block Groups could currently be SDAC classed. The value of the MHI here, in terms of how it meets the actual cost of living (COL) in Sonoma County and California has surely eroded post-fire, and also since 2010 – 2014, which are the years on which the DWR DAC mapping tool stats are based. Sonoma and Sonoma Valley have well-documented extreme COL inflation, particularly for housing. We can be certain that post-fire, all poverty and housing indicators have gotten worse than shown in these DWR mapping tool income figures.

Current, 2017 Sonoma County Area Median Income, or AMI is $67,100 for a family of two. The Springs Census Tract and Block Groups have more households with multiple children. Thus, using a 2010 state MHI threshold disenfranchises those in Sonoma Valley with larger households and does not capture their actual, per capita level of poverty. DWR and Census classification of many Sonoma Valley households should acknowledge that DAC household annual income here tips towards the SDAC level.

The 2020 Census will be big in defining the extent of regional poverty. Unfortunately, the Trump administration has sought to politicize the Census with a citizenship question, and has made many other efforts to disenfranchise the poor, for example, gutting the affordable housing tax credit, that has cost non-profit builders in California to lose one of their most significant sources of funding. An anti-public housing advocate has been put in charge of HUD! This is why the 48-unit SAHA project on Broadway has not started yet, lack of funds. Count on Trump to make every effort to undercount in the Census, and to foil public efforts to address poverty. It’s on us here, in our own backyard, as to address how to create a just society.

State MHI in 2010 was $67,000. This is for any household of any size. The Area Median Income in Sonoma County is currently, as of 2017, $67,000 for a family of two. The upshot here is that the DWR DAC mapping tool data, and lack of SDAC classification, does not capture the cost of living and actual per capita levels of poverty in Sonoma Valley. Poverty and the housing crisis in the Springs is worse than reported.

Houston…. We have a problem.

One major pragmatic option to address regional housing issues is for the city to annex the Springs. This would be an inclusive, enfranchising action to show regional commitment to social justice, and for the liberal North Bay to walk their talk. This would unify the lower valley urban area, and likely bring substantial county money to support the annexation, as has happened with the Roseland annexation by Santa Rosa.

Springs self-incorporation is a much less viable option, with lack of sufficient tax base, and duplication of services by existing special districts.

In order to prepare the path for annexation, the Sonoma UGB would need to be extended to cover the Springs urbanized footprint. This is basically out to the Agua Caliente area, and bordered generally by Arnold and Hwy 12. The Springs MAC map could be used for a UGB template, or a smaller version of the Valley of the Moon Water District map.

With a city UGB in place at these general Springs boundaries, the city could then extend a sphere of influence, in preparation for annexation. Without the UGB and sphere boundaries set up beforehand, there can’t be any annexation. The process has to get started ahead of time with these kinds of land use decisions. Pragmatically, from a LAFCO, state rules context, the city could not annex anything on northern 8th Street East without having to also take local DACs in the Springs as well; no cherry picking and gravy only allowed.

The city is the natural administrative unit to expand to cover the lower valley urban area.

These ideas should and could become part of the city’s General Plan UGB discussion starting this January, 2019, to flesh out the options. City council members, Planning Commissioners, LAFCO staff, and Susan Gorin could meet to discuss options, and to develop higher levels of cooperation. Certainly, there will be naysayers, and all manner of reasons given for why not. It will take some intestinal fortitude by decisions makers and those with power, to push for a regional versus a parochial view of the future.

Certainly there is no harm to look at a full slate of options with an open mind. An open mind can cut out buzzword-based UGB discourse about “sprawl” etc., and just look at the options and what kind of AMI housing is going to be built ASAP. Costs that are not managed up front come back later to cost even more. Prevention makes sense. Planning makes sense. Dealing with the regional housing crisis from a valley standpoint makes sense. Housing is a prime aggregating indicator of public good or public bad, and it is the job of public servants and decision makers to try and serve the public good. Our world here in Sonoma does not stop at 6th Street East or at McDonald’s. And surely Sonoma can’t cry poverty as a reason to deny inclusion of the truly poor.

The city’s UGB process will have major impact on lower valley land use. This is maybe 4000 voters deciding land use for 38,000 lower valley people within five miles of the Plaza. For the bulk of valley citizens, this is policy making without representation. A regional planning process is called for, with more cooperation from city and county as to General Plans and Housing Elements, with a focus on how best to collectively address the AMI affordable housing crisis, as well as collective water, sanitation, and other lower valley municipal service issues.

With one larger municipality that takes in the current lower valley urban area, Sonoma can be the special historic district character cash cow that benefits all who serve it.

Just as the county has paid Santa Rosa to take Roseland, to address DAC, SDAC, regional poverty and Regional Housing Needs Assessment (RHNA) issues, the county could pay Sonoma to take the Springs. There’s an opening now with the Roseland example. To explore options that may better serve Springs DACs and SDACs; the people who live there serve Sonoma. A number of city council members could make an ad hoc committee, and open a conversation with Susan Gorin and LAFCO staff. With a potentially more action-focused city council for local housing, more city policy integration with the Springs is clearly called for.

Sonoma can’t keep all the gravy and externalize all the negatives; the town has a burden to address the housing nexus it creates. This is only fair.

The city taking in Springs DACs would be supported by the LAFCO mission. “Factors considered in a sphere of influence review focus on the current and future land use, the current and future need and capacity for public facilities and services and the existence of any social or economic communities of interest (emphasis mine).” The latter social or economic communities of interest or DACs and SDACs, could be the critical angle to pursue regarding housing. Local DACs, SDACs, potential annexation, and the Roseland example, make a worthy confluence of factors that bear looking into from both the city and county General Plan processes.