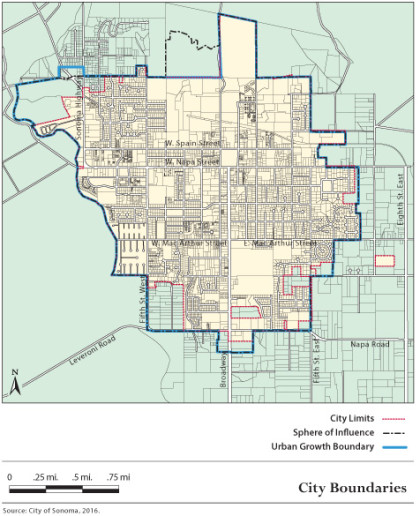 The lower valley floor around Sonoma is a unified commercially and residentially developed area. This area is essentially the same community but divided between city and county.  Concentrated lots and parcels are connected by a street system that goes from Buena Vista, 8th Street East and Napa Rd. to Arnold Drive and then up valley. Around Agua Caliente, the concentrated urban area ends, the valley narrows down and starts to be more tightly bordered by mountains. This developed area, call it urban or suburban, is surrounded by a combination of agriculture and rural residential land uses.

The valley developed area has a common population of 38,000 people, served by multiple special districts and services: hospital, school, sanitation, fire, water, waste and law enforcement. These special districts have boards of directors, public meetings, and in many cases, overlap the city and county, to serve the unified population in the lower valley urbanized area. Special Districts, services and government are duplicated in a unified urban area; this is inefficient. Who gets the better end of the deal, Sonoma or the county?

To understand more about how all this overlapping civic administration works, a study of the role of the state-required, Sonoma County Local Agency Formation Commission, or LAFCO agency is necessary. LAFCO’s mission:

It is consistent with LAFCO to look at ways to promote the efficient provision of public services. This can be done by looking within the lower valley urbanized footprint, but also outside the current city boundary.

Valley Census tract maps show many stats, and with annual income and there is a sharp break between Sonoma and areas in the Springs and Temelec. The 2010 Census Portrait of Sonoma County and the 2017 EDB Sonoma valley Community Profile corroborate a clear other side of the tracks-type economic and social geography here in Sonoma Valley. This is not “efficient” nor fair.

The city of Sonoma is a two-square mile area, with 11,000 of the 38,000 lower valley people. Sonoma, in addition to the above geographic and demographic descriptions, is surrounded by a tight urban growth boundary (UGB), and with a limited sphere of influence that has in the past, been consciously pulled back from more liberal borders.

A study of local maps, special districts and land use, shows Sonoma to be an administrative island that concentrates services to an artificially proscribed population, but that also takes advantage of collective services for the whole lower valley area. Sonoma-proper services cost city residents more, but those residents also get a much higher level of representation. Proper and equal representation is a valuable and compelling goal in our democracy and society, and an aspiration to provide such representation to Springs residents, particularly Latinos, is worth the effort.

By being able to define a UGB and sphere of influence, city residents have more political and land use power over the valley’s collectively shared urban area. Zoning is a tool that has been used to protect Sonoma as an island, much in the same way as in Huntington Beach, Carmel and Marin County. This type of protectionist dynamic is now being challenged by the Newsom administration. Why? Because administrative fantasy island units like Huntington Beach and Sonoma allow for the concentration of power that exclude lower income households and citizens.

A look at past Housing Elements shows that in spite of a lot of verbiage about inclusivity and economic fairness, Sonoma has way underbuilt low and very low income housing, almost as if there was never any intention to make it happen at all. Sonoma has a substantial RHNA deficit of low and very low income housing from past Regional Housing Need Assessment, or RHNA cycles. Market rate developers typically do not take a density bonus that would force the inclusion of low and very low income housing. In fact, Sonoma’s inclusionary feature specifically cuts off “low income” units at 100% and 120% of area median income, or AMI. The low-income poor are excluded from a larger municipality by being kept on the other side of the tracks, and then not even included in the city inclusionary provision.

UGBs are intended to protect the rural character of ag and open space lands and uses, but in the case of Sonoma, urban land use directly abuts significant areas outside the city especially towards the Springs and northern 8th Street East. Any UGB extension to these areas would not be “sprawl” into greenfield areas more than it would be connecting the dots of existing urban uses, with the added benefit of enfranchising more low-income people. Inward focusing, within the overall lower valley urban footprint, but outside the current city, is consistent with LAFCO. The city extending the UGB and sphere, with annexation as the end goal, promises potential enfranchisement that would serve all the great inclusive language in the city and county General Plans and Housing Elements.  Water and sewer infrastructure extensions in such a scenario would be no more onerous than they will be to connect in current city sphere areas that are included in the current city Housing Element.

The Sonoma UGB, then has part-ways been used as a protectionist tool against growth, development, and against inclusion within an existing urban area. The socio-economic inclusion aspects, of seeking better efficiency in local administration, are obscured by much talk of sprawl, open space, and small town character. The end result has been to consolidate class power within city boundaries. Sonoma’s planning goals, in the General Plan and Housing Element, have an obvious tension between preserving small town character on one hand and socio-economic fairness and working class inclusion on the other. Both of these values are restated constantly. The point I get after watching years of debate here, is that fairness is pretty much just words, and that character protectors rule the roost, and that equity is a promise that may never be realized under current land use and zoning trajectories.

From a visual and lifestyle standpoint, the small-town character is really nice. No arguing that. Who wouldn’t like it? Fighting about sharing such great gravy is a First World kind of problem. From a socio-economic standpoint, who is all this character for? When do the fairness and inclusionary aspirations rise to an equal priority? What is really sustainable here? Doesn’t actual sustainability have a critical social equity component? An obvious conclusion: business as usual and market rate housing have not done the job, and character protectors have enabled that to continue by selectively enabling some General Plan values over others.

The current “Mockingbird Lane” project on the hospital South Lot is one more case in point, of more market rate housing coming in along a seemingly unstoppable business as usual pipeline.

Land use control serves to protect Sonoma’s special status, and make it so less well represented and less affluent valley residents in the Springs, members of the same community, become disenfranchised and subject to Sonoma’s land use decisions. Low income Sonomans: seniors, farm workers, single women, minimum wage and lower area median income workers have been increasingly displaced, and voices and advocacy for their interests become less and less. Sonoma then, though RHNA failure and Development Code provisions, does not build housing for lower income community members, and the deck gets progressively stacked toward the more and more wealthy.

This could almost be seen as a kind of economic cleansing, that transpires one drip at a time and no one really notices. Instead of trickle down we get trickle out. All the while, reasonable arguments about character and green spaces provide cover for failure to adhere to valid General Plan and Housing Element aspirations. “Sustainability” becomes all economic and environmental with no social component. This is pretty much the same pattern that has caused the state to sue Huntington Beach.

With the city now working on an urgency updates to the Development Code, and the city council goals setting meeting and UGB planning process coming up soon, now would be a good time for a changing of the channel, to reset housing, land use and zoning priorities, so as to bring social equity aspirations to a manifestation of where they should have been all along.  Equity is, after all, an important part of efficient provision of public services. If we are smart, efficient will be seen as sustainable, and sustainable will always include people and social justice as equal parts of good planning.