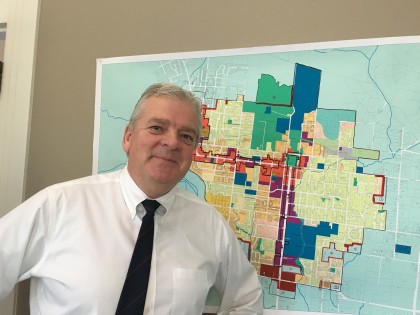 I pick up a British accent.

Yes, I was born and raised in England, in a small town near Nottingham that dates back to 1000. On this old map, here’s Bilborough, where I grew up, and there’s Sherwood Forest. I’m a map geek. And I’ve always had a penchant for history and geography.

What brought you to this country?

Well, my two older sisters preceded me to Utah. Our family belongs to the Latter Day Saints Church. My older sister met and married a LDS missionary from the U.S. who came to our town in England. So I had visited the U.S. several times as a boy, and decided to go to university at Brigham Young.

What did you study?

My B.A. is in geography, and then I got my MCRP, Masters in City and Regional Planning. My only regret with coming to the U.S. was that it dashed my dream of being a pro “football” player. I did play soccer for BYU, which is a Division 1 team. And I still play soccer whenever I can.

Your team? The Tottenham Hotspurs.

And what brought you to California?

My wife, whom I met and married at BYU, was from the Santa Cruz mountains, where her parents still lived, and we moved there. My first job was two years as assistant city planner in Morgan Hill. Then I became a senior planner for the County of Santa Cruz. I was there during the Loma Prieta earthquake.

That must have been intense.

I essentially put down my planner’s hat and put on an inspector’s cap, working 16-hour days, six days a week.  I learned that the reinforced concrete didn’t mean that a building would stand; but the buildings built to code saved lives.

To Tracy, for four years as Senior Planner, then to Folsom as Planning Director for eight years. There I helped with the incorporation of neighboring Citrus Heights. That was before our City Manager Cathy Capriola worked there. My last public position was two years as Assistant City Manager in Elk Grove.

After Tracy, where did you go?

The 14 years before I came to Sonoma I spent in private practice as a land use consultant. I represented at times private developers, other times, public agencies. I love dealing with LAFCO – the Local Agency Formation Commission.

Well, you could say I entered a vacuum of talent and experience, since both the long-term director and the senior planner had departed well before my arrival. I came to fill a void. But I knew that.

What are the challenges here?

The classic urban interface between what you are and what you want to be. Sonoma has a unique sense of place. The work here is very enjoyable – I feel efficacious, seeing a direct relation between decisions I make and their being effectuated on the ground.

Can you elaborate about Sonoma’s sense of place?

Sonoma’s uniqueness is exemplified in having former council members return to city service as planning commissioners. I have sat down with (new Planning Commissioners) Larry Barnett and Steve Barbose, and it is clear to me that they will be great assets. They will bring perspective, and help fill the institutional memory bank loss – the void I mentioned. 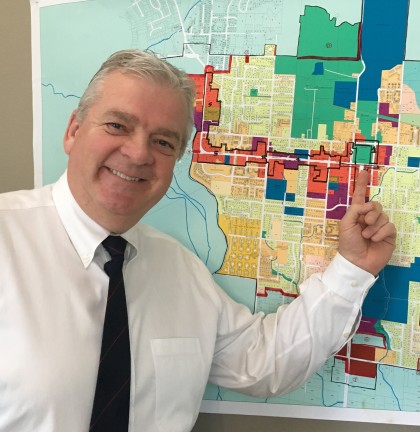 What will you be working on in the future here?

I will be supervising, guiding, land use development, with the upcoming renewal of the Urban Growth Boundary and the General Plan. Current land use issues are tasting rooms, cannabis regulation and cell towers.

Were you aware of projects that had been appealed at the time you interviewed for the job?

Yes. And appeals are quite common in the communities that I have worked in. And most appeals are from decisions made by the Planning Commission to the City Council.

You described your role with regard to the Planning Commission as “staff.” Can you elaborate?

I am the first line for the Planning Commission and I staff it with other staff members, much like the City Manager is “staff” to the City Council – and she has auxiliary support staff  (such as the Public Works Director, City Clerk, etc). I report to the City Manager.

Does your department evaluate a proposal prior to the Planning Commission’s consideration of it?

Yes, for instance use permit applications are reviewed by staff for compliance with the municipal code (“zoning” in particular) and staff makes a recommendation for the Planning Commission’s consideration. They may approve, deny or approve with conditions, usually after a public hearing.

Is there anything you want to add – something you wish the readers to know?

My wife and I have been married 34 years and we have four grandchildren. I enjoy reading history – of the Mormons, of the American Civil War, and especially of the First World War, as my grandfather was a Regular in the trenches in France and Belgium for four years, and returned home alive. Also, I am an avid philatelist. I am very proud to be a member of the AICP, American Institute of City Planners. And I really enjoy being able to practice my trade in this unique and beautiful place.