Sonoma history: The war before the revolt 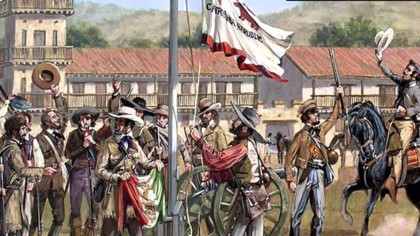 By George McKale | From The Sun archives

Here in Sonoma, the Bear Flag Revolt takes on a life of its own. Like many, I agree that Sonoma is the center of the universe. Like many, I am biased in my interpretation of Sonoma’s significance to California and U.S. history. While the Bear Flaggers came a-calling on June 14, 1846, little did these revolutionaries know that a month earlier, war had been declared against Mexico by the United States.

Mexico had long been concerned with U.S. threats to annex Texas, so it may have been a little awkward for both countries when Texas became a state in 1845. The diplomatic relationship between our two countries was severed upon such a declaration. Prior to statehood, there was a discrepancy between the two countries regarding the Republic of Texas boundaries. The Republic claimed land up to the Rio Grande, while Mexico claimed the border up to the Nueces River.

President Polk contacted the American consul in Alta California, in essence stating that he supported voluntary accession to the U.S. John C. Fremont arrived in California with an armed militia in the winter of 1845-46. Fremont was commissioned by the U.S. government. He arrived in the Salinas Valley and claimed he was looking for a seaside home for his mother. Sort of warms your heart!

The heart of Mexico’s Northern Regional Commander, General Jose Castro, was not warmed by the thought of Fremont’s real estate inquiries. Castro insisted that Fremont go back from where he came. Instead, Fremont raised an American flag on Galivan Peak overlooking the Salinas Valley.

President Polk offered the Mexican government $25 million for the Rio Grande border. Mexico was not interested. In fact, under the rule of Mariano Paredes y Arrillaga, Mexico held on tight to the notion that Texas was clearly within Mexican territory.

To put events into some kind of historical timeline, the infamous Battle of the Alamo took place 10 years before the U.S. declaration of war against Mexico. Prior to battles at the Alamo, which annihilated Americans protecting the Alamo, and at San Jacinto, which ended the Mexican revolution, Mexican troops were driven out of Texas. Hostilities between our two countries were still going strong 10 years later.

In 1846, Polk ordered General Taylor and his militia south of the Rio Grande. U.S. forces were now well into the area claimed to be Mexican territory by the Mexican government. Now, under the leadership of General Chlamon, Mexico claimed that all of Texas was theirs. The Mexican Calvary attacked a U.S. patrol on April 25, 1846, killing 16 U.S. soldiers.

Given Slidell’s efforts to buy the disputed territory and the attack by General Chlamon, Polk stated that, “Mexico has passed the boundary of the United States, has invaded our territory and shed American blood upon American soil.” U.S. Congress declared war upon Mexico on May 13, 1846.

In the next 20 months, U.S. forces took Mexican cities one by one. The Mexican forces could no longer defend against U.S. forces. The Treaty of Gaudalupe Hidalgo was signed on February 2, 1848, ending the war. The treaty also provided the U.S. with control over Texas and ceded to the U.S. the states of California, Nevada, Utah, New Mexico, and parts of Arizona, Colorado, Oklahoma, Kansas, and Wyoming.

The U.S. forgave a $3,000,000 dollar debt and paid $25,250,000 for the land. President Ulysses S. Grant, no stranger to Sonoma, was quite opposed to the war, believing it was unjust to bully a nation far weaker than the U.S. Reflections by many compared the U.S. desire to obtain more land to the actions of European monarchies. Many felt that war could have been avoided, and annexation sought through negotiation rather than aggression.