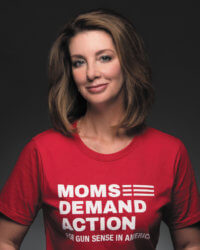 Can a woman with a laptop be more powerful than a man with a gun? Shannon Watts thinks so.

There are 80 million moms in America — and together, they have the power to end gun violence in this country believes Watts, who founded the Moms Demand Action for Gun Sense in response to the 2012 shooting murders at Sandy Hook Elementary School.

“Gun violence is not an issue that is Republican versus Democrat,” Watts, a mother of five, says of her work. “It’s not gun owner versus non-gun owner. It is the vast majority of Americans versus some lawmakers who are beholden to the gun lobby.” 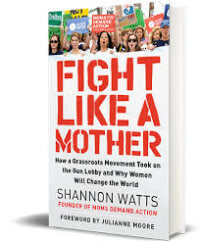 Her new book is Fight Like a Mother: How a Grassroots Movement Took on the Gun Lobby and Why Women Will Change the World.

“I absolutely believe that women and moms in this country are the secret sauce to social activism and advocacy,” says Watts. “They multitask; they do everything from make snacks to create our strategy to stand in the spotlight. And I really think when you look at activism in this country, from its very inception, women have been at the forefront of making things happen.”

In the United States, an average of 96 people a day die from gun violence. It’s a societal problem, not a partisan issue. “This really transcends all of the labels that we put on one another. And if we all come together and address the issue, which is that Americans are dying, we can have a much more polite conversation.”