A risk taker, Transcendence Theatre Company co-founder and artistic director Amy Miller dances to the music of the journey. “You always get the part you were supposed to get,” says Miller. So, it’s not surprising that her favorite musical is A Chorus Line, the Broadway hit that portrays young actors/dancers in the audition process. 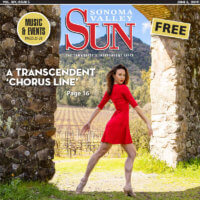 “For years we have been dreaming of producing a musical and offering a new experience for our patrons in our unique and magical venue,” Miller says. “It is because of this amazing community and incredible financial support that we are able to do it.”

When A Chorus Line debuted 44 years ago it was a game-changer. The musical was inspired by a group of Broadway dancers who gathered in 1974 to discuss their professional struggles. Choreographer Michael Bennett joined the group and soon after developed, led, and taped “self-evaluation” sessions with the dancers. The tape recordings served as the story treatment for the musical.

Conceived, directed, and choreographed by Michael Bennett (with additional choreography by Bob Avian) and featuring music by Marvin Hamlisch and lyrics by Edward Kleban, the show had no sets and no costumes (until the finale) as it followed the anxious experience of a group of Broadway chorus dancers at a Broadway audition. The character-driven story revealed its characters’ personal stories, intimate feelings, fears, and revelations in a way no other musical had before. Many of the dancers who contributed their own stories to the musical were cast in the production, including Donna McKechnie, who played the role of Cassie.

The musical had its Broadway opening in July 1975 at the Shubert Theatre and received critical praise while breaking previous Broadway box office records. The musical was honored with nine Tony Awards and received the 1976 Pulitzer Prize for Drama. When it closed in 1990, A Chorus Line was the longest running Broadway show in history.

Miller recalls first seeing it at the Ohio State Thespian Conference as a junior in high school. ‘“It changed my life in so many amazing ways,” she says. “My dream was to dance on Broadway, so I could relate to the stories I was hearing on stage. I was moved by the humanity and truth it shared. Even if you are not a dancer, you can relate to the honesty.”

“Everyone is ‘on the line’ in their life.”

Miller appeared in two professional productions of A Chorus Line – playing the role of Bebe at the Barn Theatre in Augusta, Michigan in 1999 and the role of Kristine at Naples Dinner Theatre in Florida in 2001.

The following year Miller was cast in the national touring production of the Tony Award-winning Broadway revival of 42nd Street. After touring for nearly two years, Miller had her Broadway debut in October 2004 when she joined the 42nd Street cast at The Ford Center for the Performing Arts and was a member of the Broadway cast when the show closed in early 2005.

Miller went from Broadway to L.A. and established a viable career in television, film, and commercials including a role in the award-winning HBO series The Newsroom.

“I was in Los Angeles focusing on my television and film career when I reflected on A Chorus Line – the part where Cassie’s character talks about the ups and downs of her professional career. That reminds her, “‘Oh, yeah, commercials – almost got to squeeze a roll of toilet paper, but I lost out in the finals. Isn’t that something? Seventeen years in the business and I end up flunking toilet paper squeezing,”

“Cassie’s line, revealing the reality of her professional experience, struck a chord with me. That was when I decided to commit to going after the dream of Transcendence Theatre Company,” said Miller.

Miller says she left a very successful commercial career in Los Angeles to help create the fledgling Transcendence troupe, now, after six seasons, well established and nationally renowned. ”My husband and I had built up our careers and we thoroughly enjoyed L.A. But in our hearts we wanted to pursue our dream of building a musical theater company so we could join with artists to inspire and uplift a community.”

“I am so happy that we followed our hearts,” she says.

“A Chorus Line was born out of stories like Cassie’s. Broadway dancers felt they were not treated and respected for their talents, which is why the group of dancers who inspired the show wanted to use their talents to create new works of art,” said Miller. “From their stories came a musical that not only inspired dancers, but also millions of people around the world.”

“I have played many parts throughout my life and career. Each one has led me to the experiences I was supposed to live and to the people I was supposed to meet. Every artist is constantly creating their own role and contribution to society through every creation.”

It is, she says, “like living a serendipitous journey.”

Broadway Under the Stars 2019

Performances are 7:30 p.m. presented weekends on select summer dates. Pre-show picnicking at 5 p.m. in the park’s meadow, with homemade picnics or items from local food trucks, vendors and wineries. For tickets or more information call 877.424.1414 or BestNightEver.org