Community action in a world of individuals 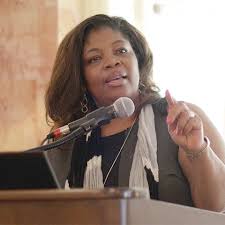 A critical baseline is, Dr. Manuel, said, is how to get people to lean in on challenging issues. Things have become more difficult in the last 40 years, more divisive. It’s up to everyday people, to lean in and get others to join in, to solve and address the tensions that are animating conflict.

We’re in an era of hyper-individualism, that makes it hard to get to a sense of we. Community dissolves in a world of individuals.

Three critical issues: climate change, health issues, and housing. Teen suicide rates are way up, “something is wrong.” Housing is a foundation for life, it’s home, it’s an aggregating indicator for many other issues.

Critical challenge, “transform the systems that shape the future of our communities.” Engage communities to build public will, leaning in to big things, like the JFK era.

“The single biggest failure of leadership is to treat systems and adaptive challenges like technical problems.”

How are you helping your community to adapt to the future that is coming? Three adaptive trends: graying, browning, and automation.

For graying, social security is insolvent, there’s not enough workers to pay in to keep the need afloat. “Something is wrong here.”  For browning, whites have got to move over and allow others to have a co-equal place in society. For automation, there is a loss of jobs, a loss of the top job categories in the US. This plays into no money for social security or housing.

Amazon, tech is replacing brick and mortar business; Manuel showed a video of an Amazon mother ship blimp with drones delivering stiff to people… and automated car delivering pizza. But in order to receive delivery, you need an address, a home.

How to ensure access to a decent, affordable home? For people with very low income whose jobs have disappeared?

Great leader shave always understood the importance of building public will. Positive public will is hard to come by these days, with all the crises and bad numbers; things seem so heavy. It’s easy for people to lean out. Meetings about the future of Sonoma should be packed. Manuel says to the crowd, “it’s your responsibility to bring them in…”, to weave the fabric of the community.

What housing system to address? It’s not as easy as going to Home Depot and Habitat puts up some drywall and then the day is done, more complicated than that. It gets into Planning, zoning, General Plans, development codes. “It costs $600,000 and take four years to build one unit for those folks!?”

For housing to work, all the actors have to be working in alignment, banks, city, county, state, feds.

Manuel got into NIMBYs and how arguing backfires, it all devolves into a zero-sum game. NIMBYs say many things, they deflect: “you don’t have to live here.” You don’t/ can’t talk people out of their position; logic doesn’t work; using rational argument makes people hunker down and get more hardened into their positions. Facts, figures, and data don’t win arguments. This all adds up to a backfire effect, the good intentions make it worse. The fact-based call to action isn’t working.  (The same has been said about climate change arguments, a diff tack is needed to convince people to buy in to backing off fossil fuel.)

The Progressive Left is going to fact people to death… Better to give people an opening and some space to reach new conclusions themselves, to have them lean forward rather than lean out. How to get to your neighbors with conversation about critical adaptive issues? How encourage leaning forward, to encourage someone to give, to sacrifice?

People are hungry to buy into a vision, to connect with other’s aspirations. You need a wake up statement, to shock and break people out of their auto pilot, for example, when Trump said he could kill someone on 5th Ave in NYC and still be elected, that was a shock!

Manual had a good graphic with ways to navigate the backfire landscape. In a way it is similar to George Lakoff’s reframing, but with a diff end, not to “win” in politics, per se, but to adapt and be sustainable. In the graphic were nine topic headings and the lecture only go to the first four.

We and why first. (I statements indicate people are not listening.) Reframe with a relatable, positive message, in the we/ why way we want them to relate. We move closer when we feel more optimistic. Connect with the hearer; whatever it is, it has to be about them.  Empathy, connect with people’s aspirations. Video example of blind guy who had one sign that got no response and then someone wrote in his sign, “it’s a beautiful day and I can’t see it.” and he got tons of money. People are fundamentally self-centered and focused on their own interests, need to appeal to individual interest that have a collective benefit

Navigate dominant narratives. Take back the narrative. Reset the frame: long-term prosperity for all. People don’t live in housing, they live in homes. The future is a battle of mobilization to channel participatory energy, for good, bad, ugly. Save the local library example, Tea Party framed it as a tax issue, no taxes. The folks who wanted the library put out signs and messaging about how to join in a book burning; this was a shocking wake up, people were against it, it turned the tide to favor taxes for the library. How to debate the merits of an issue and get people out of their auto pilot modes.

Tell a story of “us.” “We need the people who need affordable housing. A community is made up of all types and classes. Have your own story to tell about housing issues.

Use data to anchor the solution. Put us in our future. Put people in the future in the right way. The sheer number of lottery tickets sold in the US shows people dream about what is possible. What are we creating? Dream about what this could be, put out positive data; how do we get there? This twist changes how people lean in to conversations.

Strategic case making. Nantucket housing as an example of leadership in action. The community was losing critical members to lack of housing, video image showed people simply disappearing. Innovative efforts were needed to retain the workforce that provides the services that keeps any community going.

Manuel’s graphic had the following topics not covered in her lecture:

Make the system and equity visible.

Strategic horizon and the catalytic moment.

People are resilient and adaptive. How do we get people to see the beauty of what is coming? Versus the doom and gloom and leaning out?

I asked Manuel about a current theme some are using against Affordable Housing here in the Springs, an assertion that there is not enough carrying capacity in the local water delivery system to support more “growth.”  What did Manuel think? She said lean in, look to see if it’s true, if it is, then show three ways to solve it. If people questioning water system carrying capacity don’t go for solutions, then you are separating the wheat from the chafe as far as who may be clinging to a hardened NIMBY positions. If the carrying capacity argument is a NIMBY argument, that will become clear.

Manuel asked, how to get in front of things versus reacting? If we don’t lean in to solutions, things will be bad.

What are local examples of when people did lean in together? (The hotel on the hill was such a moment. Measure B was another, but that had opposing groups leaning in to diff takes on a downtown hotel. The results of Measure B are still divisive, no one form the core groups there has come together.)

Manuel went on to say that people do want to roll up their sleeves, put their hands on and work. People are hungry to work for the good, not out of all negatives. Get people optimistic about their own agency, their own investment of time and achievements.

Katherine Fulton asked about the “we”, that we can’t move a lager conversation forward without a “we” element; in the 2017 fires; people were kind, loving, empathetic. Manuel noted that some say we need another disaster to bring people together. People want that feeling, they just don’t know how to get back to it. When times are good, people retreat back to their individually centered lives.

Dr. Manuel closed by saying that the county Community Foundation, of which the Sonoma Valley Fund is a local arm, is working on a program to identify what messages are backfiring locally, and will be coming out with a campaign to try and change the channel.

Fred’s comments (not speaking as a rep and member of SuSo, but as an interested supporter)

SuSo seems to be on board here with Dr. Manuel and the Community Foundation, looking at this effort to address backfired messages as a silver compass, to point people in the right direction for adaptation, resiliency, sustainability, health, and equity.

This is about how to be “for” something rather than “against.” We now it is way easier to rally people’s negative emotions and get them to be against something. Being “for” things is a harder rallying cry.

In human evolution and baseline human behavior, according to E.O. Wilson and evolutionary psychology, people are adapted to compete individually within groups, for reproductive and status success, but are also adapted to cooperate in acting against out-groups for resources and territory. This is a basic in-group/ out-group dynamic. People have competing imperatives

SuSo was not going to be a single magic bullet that changed everything all at once. This building stronger public will lecture was a kind of magic code of conduct compass, to point at ways locals can talk about and frame issues so as to all be pulling the same cart in the same direction, for climate, health, and housing, the top three issues.

SuSo core is women, leader is a woman, weavers, includers, empathetic people. This is the path to follow. Moral authority. People who already know how to converse and listen and deal with social conflict, who are envisioning a future for their kids.

Thrust is inclusiveness, to turn the valley away from exclusiveness and displacement of the people who are part of any community, the AMI workforce.

What are we up against? Business as usual, a maladaptive economic system, extreme social inequity, short-term planning, perverse selfish incentives, notion of unlimited resources, older wealthy white men in charge of everything

Amazon drones and auto driving cars can’t deliver everything, some things take a human touch. It takes a human touch to care for others who through modernization and automation, will not have any job or any place.

People are in one dimension of their capacity, nothing but cooperative. Cooperation and smarts is how we conquered the world, as creatures with no claws and fangs.

Backfire: How to deal with people you can’t stand book, Just self help

Self help. Communication, listening, New Age, it’s been waiting on the shelf in everybody’s face.

Some won’t be won over, ever.