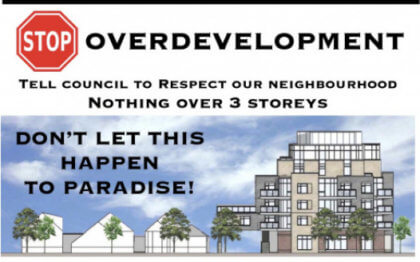 As we enter into the General Plan process, that includes renewal of an urban growth boundary (UGB), and as we find ourselves embroiled in existential climate change issues and massive social inequity, the term small town character is used over and over. What does this mean? Does small town character address climate issues and inequity?  For explication, let’s start off with a standard definition of character.

Middle English: from Old French caractere, via Latin from Greek kharaktēr  ‘a stamping tool.’ From the early sense ‘distinctive mark’ arose ‘token, feature, or trait’ (early 16th century), and from this ‘a description, especially of a person’s qualities,’ giving rise to ‘distinguishing qualities.’

Character is a unique, distinguishing feature or set of qualities, a mark that makes something stand out. The term small town character is a repetition, like Mt. Fuji (Mt. Mountain) or Picacho Peak (Peak Peak), as the essential nature and critical property of small is small.

The Highway 12 strip and latter-day architecture with higher densities of the West Side lack any real distinction or character. The strip and tract developments could be Anywhere America.

Looking all around, there is plenty of rural character here. The lower Sonoma Valley in which Sonoma is ensconced has much open space, nice rural residential lots, and ag land use in all directions. Sonoma Valley is noted for being off the beaten track. There are not enough people here to even justify a Grocery Outlet or Trader Joe’s. Rural character is not under large-scale threat, only from being spoiled in its purity by a garish, ultra-wealthy project here or there. And, at any rate, rural character would be the purview of the unincorporated areas, while small town character would be the purview of Sonoma, that is unless we cultivated a valley-centric view of a combined, shared space, and gave all a say in common land use decisions.

Can real character be a commodity?

What about the commodification of small town and rural character? Since the late 1980s, great efforts have been made to sell Sonoma and the Valley as a tourist attraction, to brand Sonoma. This branding goes on at both city and county levels. (This is not unusual, as any municipality looks for ways to pay the bills and for people to have jobs, and many in America and the world would be glad to have Sonoma’s problems of too much, instead of not enough.)

Tourism boosters here have won the day; it used to be “we don’t want to be like Napa”, now we and the whole valley are about the same as Napa. Sonoma’s essential spatial, built, and environmental qualities have been relentlessly marketed, and the distinctiveness has become a prop to cash in on. Anyone would play to their strengths. This branding and commodification however, has cheapened the actual character, and made ineffable qualities into a façade of items for sale. This is what’s called “selling out.” Can’t buy love, can’t buy authenticity. In the process of selling out, whatever social character there was has been destroyed. Why? Because selling out has inflated all prices to a level unaffordable by the workforce. The people who keep the whole place running have been externalized.

Social character seems to get the short shrift when compared to the spatial/ built character, and to the size limits that are the definition of small town character. Part of being a small town is having structurally limiting factors that prevent growth and that keeps things small. Is this just to protect those who like it small? Why? Is it OK to have places where workers are just temporary guests?

The urban growth boundary is a structural limit that sequesters the small-town character, which is mainly a size thing. The core area will keep its character regardless of where an external city boundary is. Making a size limit then heats up all prices inside the boundary. Character then about becomes synonymous with protected exclusion. This is why the engaged public who attended the Housing Our Community series by the city sees the value in desegregating Sonoma, by calling for 53% deed restricted housing over the next 10 years. There is a lot of value in having people’s kids, grandparents, and all manner of service workers as immediate neighbors. Real, authentic social character mirrors the components of society at large.

Maybe if the edge can be pushed here or there to include housing for others, that would be OK? Sonoma’s two square miles will not all of a sudden become not small, if it was 2.3, 2.5 or 3 square miles; that’s still small by any measure.

Class and territorial protectionism as character?

I get the sense that all the small-town character and UGB talk masks other interests. These interests are basically those of the “haves.” Haves are freed from worrying about equity, they can worry about the environment. They got to paradise, and now no one else can come. This is not unique to Sonoma. World-wide there is resistance to the arrival of immigrants and strangers. No wonder many public comments seem to always start with a statement of how long the person has been here. This assertion of seniority and territoriality is an indicator of anti-equality privilege.

Protection of upper class enclaves masquerading behind the word character, or from fear of “sprawl”, is code for exclusionism and NIMBYism, not of holding out for authentic social character. Upper class homeowner’s sequestering of valley rural character in the name of climate protection, small town character, or carrying capacity etc. while throwing the workforce under the bus, is a convenient way to save paradise here, but, again, this is for the haves. The have nots get run out. (And aren’t we for helping persecuted immigrants? If so, we need to make some space for them, and for those who do the dirty work.)

This is a rather large sacrifice for the world’s 3 plus billion poor and working class, to get run out and off the gravy train, because others already have all the gravy, and want to be sustainable in ways that leave the poor no options. Words mean less than opening the door and reaching across.

The effort to reintroduce social character to Sonoma’s essential spatial/ historical/ built character is thus tending to a war of weasel words and coded meanings, where the protectionist interests of those calling for small town character become more and more transparent. Preserving the character of exclusive low density neighborhoods is only in the interest of the owner at the time, and is not a question of the distinctive, unchanging Plaza-area character for the whole community.

If size is really the critical point of small town character, then protecting that size becomes the object for those trying to defend such parameters, and the homeowner advantages therein. What character means is directly related to interests, and higher density, and more poor people, i.e. the workforce, runs directly against the self-interests of property owners. The more exclusive, the better the home resale value.

Putting a lid on “growth” is essentially the same as what we see in the world immigrant situation today. Marginalized people migrate to where there is more bounty. The people who have the bounty don’t want to share. Overt racism is rising up, but here in Coastal California, the game is played with a different code, but one that addresses the same basic territorial sentiments.

Neither the have-nots or the wealthy are welcome to infringe on the small-town character, and pretty much as long as the world stays one big fight and one big “I got mine, tough luck for yours”, then we are condemned to our own self-created tragedy from lack of ability to share, include, and plan ahead.