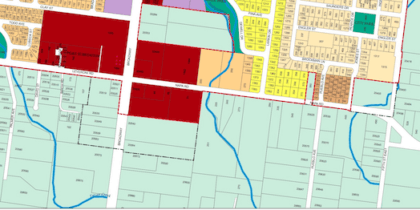 A Habitat for Humanity project is possible for a property on 285 Napa Rd. The property is 6.5 acres, with a potential 60-65 units of self-help housing targeted for people who make 80% and below of the area median income (AMI). (Local teachers don’t make 100% AMI until the very end of their careers.) Habitat has stepped up its game after the fires, to meet the great Affordable Housing need here in the city and in Sonoma County.

Habitat for Humanity is an organization founded on principles of charity, good works, and community values. With a Habitat project, the community and individuals therein have an opportunity to act, and not just talk.

From the Habitat website: “The idea that became Habitat for Humanity first grew from the fertile soil of Koinonia Farm, a community farm outside of Americus, Georgia, founded by farmer and biblical scholar Clarence Jordan.

On the farm, Jordan and Habitat’s eventual founders Millard and Linda Fuller developed the concept of “partnership housing.” The concept centered on those in need of adequate shelter working side by side with volunteers to build decent, affordable houses. The houses would be built at no profit. New homeowners’ house payments would be combined with no-interest loans provided by supporters and money earned by fundraising to create “The Fund for Humanity,” which would then be used to build more homes.”

While certain hurdles have to be crossed in terms of getting state funding, and gaining city support and approval, this potential project looks like Habitat’s and the city’s best shot for meaningful Affordable Housing action in the short run. This project is eminently worthy of community support in my opinion; having studied city land use and housing issues for many years now, I’m giving this potential project a hearty two thumbs up!

In the city’s Housing Our Community series, the participating public came to the conclusion that @750 housing units be built over the next 10 years, and that 53% of them be Affordable Housing. That’s 375 Affordable units on 10 years. With the 48-unit Altamira Family Apartments on Broadway already counted, and nothing else of any numbers in the pipeline, this possible Habitat project looks like the right thing at the right time to meet the city’s housing needs and aspirations.

The Altamira project for example, was started in 2006, and now in September of 2019 there are still no shovels in the ground. This is how long Affordable projects of any scale take.

The self-help aspect means each home owner has to put 500 hours of volunteer work into building their house. As we’ve seen with Jimmy Carter, lots of volunteers are called to help, some donate materials, some donate their time. The process would be a great opportunity for the whole community to move beyond words and chip in some real sweat equity, to show our inclusive and charitable values. Personally, I’d love to help, I’m a painter and I’ll paint for free when I have time on this. Maybe my wealthy philanthropy friends might feel moved to chip in the resources they have to offer as well.

This project is also looking at ways to make dedicated farm worker housing be a part of the housing mix.

The land for the potential project would need to be annexed by the city as it is outside the current urban growth boundary and sphere of influence. The location is just south of Larkin Lane, and right next to a number of parcels where market rate developers are planning for high density, market rate housing already. The location does not seem to present any fundamental issues because the proposed use is not out of character with the current and planned adjacent future uses. This possible Habitat project contemplates meeting the greatest needs of our society; it has so many great upsides, it’s hard to see strong reasons against it.

Crossing the inevitable land use and bureaucratic hurdles to finesse all the fine points will hopefully have much community support. I’ll save a run down on related policy details for following pieces to address. The county and city Affordable Housing crisis need is well known. Help is need now. The workforce is being displaced from this area by the day. When a potential to elegantly and quickly meet salient housing needs comes along, like this proposed Habitat for Humanity project, it deserves all the support this community can muster.

I encourage all my associates to find a way to support this potential project, and we will thereby find ourselves justified by working together for the good.