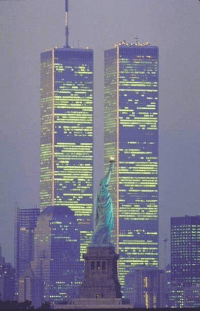 There is a lot of symbolism in this photograph of those Twin Towers, which were home to some of the country’s biggest and most powerful corporate and financial players, and from which they projected their power and influence around the world.

Lost in the understandable and justifiable anger and patriotism — and Endless War — that 9/11 provoked has been any serious examination of why 19  otherwise very ordinary men whose names few if any know or knew,  from 2nd & 3rd world countries, willingly sacrificed their own lives to strike at such a visible symbol of America’s power & influence. If America was really a good and great country bringing good things, freedom and aid to others around the world (as we always thought before 9/11), why did they hate us so much?

Yes, we “got bin Ladin” but when one looks at the accelerating decent of America’s power, wealth, reputation and influence for good at home and abroad since 9/11, so much of it is traceable to events of that fateful day, that one has to seriously think the unthinkable and ask: Did bin Laden win after all?   And did he perhaps inadvertently send another message when he did not destroy the most recognizable symbol of America’s real greatness, Lady Liberty, still standing in the foreground of this photograph.

One thought on “Troubling thoughts on 9/11”