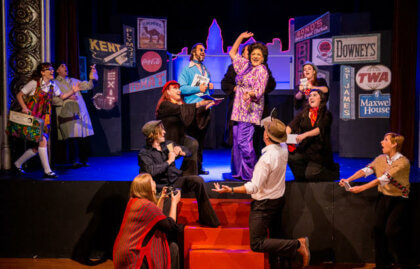 All politics, it is said, is local. So is theatre. Indeed, whether the locality is Stratford-on-Avon, Broadway, or our own Community Center, where Sonoma Arts Live is staging a production of Merman’s Apprentice, a musical comedy that celebrates the memory of superstar Ethel Merman and honors the Golden Age of song, dance, and performance art that witnessed spectacular shows like South Pacific, Oklahoma, and Carousel, all of them created by Richard Rodgers and Oscar Hammerstein II.

So far most of the publicity for Merman’s Apprentice has been focused on the women associated with the production. That’s appropriate. After all, the show is co-directed by Jaime Love, who is the executive arts director at Sonoma Arts Live Theater Company. Love’s co-director is Larry Williams.

The show runs September 27 through October 13.

The two stars of Merman’s Apprentice are Dani Innocenti Beem, who plays Merman, and Emma Sutherland, who takes the role of Muriel, the young girl who aspires to be on Broadway. Beem and Sutherland both have big voices reminiscent of Merman herself. The push and pull between them generates much of the electricity on stage and keeps the audience entertained.

Merman’s Apprentice has real female energy, but it wouldn’t hold together if it weren’t for Patrick Barr. He plays the real-life David Merrick, who died in 2000. In that role Barr serves as the ballast for the production and helps to make it more than the story of a mother who yearns for a daughter and a daughter who yearns for a mother.

Barr is eminently suited for the role of the heavy, though he lends it a light touch. A veteran of the stage in both Marin and Sonoma, he has appeared in South Pacific, Brigadoon, and Bye Bye Birdie. “My job in this new production is to be a go-between and set the stage for the interaction between these two women, Merman and Muriel, who put out power, musically, and personality,” Barr says. 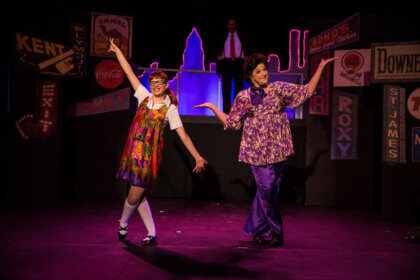 Beem and Sutherland do the bulk of the singing, but Barr has a couple of songs, including “Show Biz is Better than Life,” which seems to sum up Merrick’s own philosophy. “It’s a catchy tune,” Barr says. “People who hear it, hum it.”

One of the reasons Barr joined the production was that it wasn’t written in stone, but rather was a work-in-progress. Dani Beem, who is a close friend of Barr’s, joined Merman’s Apprentice for much the same reason. Nearly everyone associated with the show, including Stephen Cole, who wrote the lyrics, and David Evans, who composed the music, were drawn to it because they could create it as they went along.

In rehearsals, Cole and Evans saw that some things worked better than others. Both men, who live back East, have been in town for rehearsals. They’ve been willing and even eager to listen to the cast and to make changes, which has made everyone feel good about the show; it has evolved as a co-production between local and outside talent.

Evans and Cole are both looking forward to seeing their “baby” on stage. After all, it’s their first real theatrical production, complete with professional choreography and a five-piece band.

“I hope that people in the audience will ask us questions about Merman’s Apprentice,” Cole says. “It’s a big moment in our lives and we’re delighted it’s happening in Sonoma.”

2 thoughts on “Coming up ‘Merman’”