When the Chorus preached equality 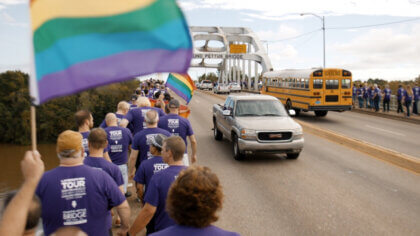 For filmmaker David Charles Rodriguez, a strong ally of the LGBTQ community, his response to the 2016 presidential election was that it reflected a “heightened, irrational division between the people in our country.” When he learned of the San Francisco Gay Men’s Chorus concert tour of the deep South, he immediately saw a rare chance to tell an emotional story in irrational times.

“I saw a group of people with beautiful music and a history of activism ready to sing against all odds,” said the director of Gay Chorus Deep South, coming to the Sebastiani Theatre on October 13. “Imagine 300 people who have dealt with discrimination their entire lives singing in unison.”

Tim Seelig, the chorus conductor, added “We have found that in the most troubled of times, singing and music has carried us through.” Along with powerful musical moments – the Oakland Interfaith Gospel Choir was also part of the tour – the film shares moving scenes of both performers and audience members confronting their own fears and prejudices.