Sonoma Valley Museum of Art’s current exhibition, “Bingo: The Life and Art of Bernice Bing,” brilliantly showcases the artist’s oversized paintings in the wide-open space necessary to appreciate the visual impact of her amazing career.

You may be forgiven if you are not up to date on Bernice Bing’s work. She was part of the 1960’s Beat generation when it was not considered cool to advertise art for sale. It was all about peace and love and as such was considered all-inclusive, yet still a movement which hadn’t yet hit all its goals. Historically, it accepted as normal the struggle of people of color as having little value; Chinese-Americans were dismissed as irrelevant. In such a society, someone like Bing with a complicated, larger-than-life persona may have appeared like a female Oscar Wilde. 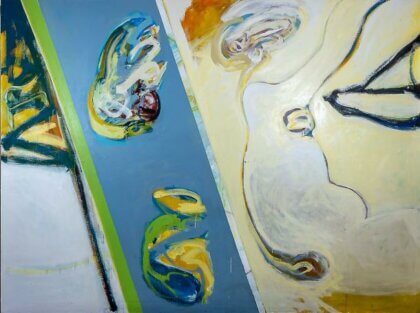 Her peers of the time were artists we revere today, even though some were still struggling to make ends meet. There was a heady “go for broke” atmosphere in art circles with devotees following a wide assortment of talented and amusing people with a lot to say. Johns, Lichtenstein, Rauschenberg, Rothko, and Warhol were a few of many holding court in the new genre after Abstract Expressionism, challenging the concepts of traditional art of the 1950s, and wielding considerable influence over the artists of the time. Avant-garde artists were a group unto themselves, most living wild lives and experimenting with the offerings of the day.

Bing’s works encompass a wide range of genres, such as abstract expressionism and calligraphy. One of her early mentors was Japanese artist and calligrapher Saburo Hasegawa, an early advocate for abstract painting who led Bing into her latter style that incorporates calligraphic art. She also studied under Richard Diebenkorn, Nathan Oliveira, Elmer Bischoff, and Frank Lobdell, becoming known especially for the large abstract paintings to which she devoted much of her time.

The term “expressionist” first comes to mind, but it doesn’t do it justice. It’s far more than that. The exhibition is a powerful presentation of Bing’s paintings, which SVMA has grouped as much as possible by each style. Margy Maynard, SVMA’s program director, masterminded a wall of text and photographs relating to the years Bing was painting, showing the concurrent events of the time for reference.

Bing worked until her death at the age of 62 in 1998, exploring different influences. Included in the show is “Vital Energy,” a work from 1986 which resulted from a visit to China, Korea, and Japan to study with the prominent artist Wang Donling at the China Academy of Art in Hangzhou. In it, Bing combines calligraphy and abstract expressionism. 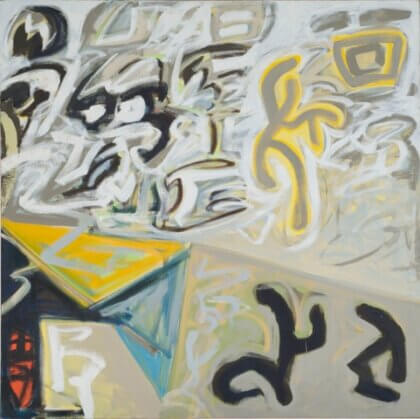 The Women’s Caucus for Art, headquartered in New York City, with 23 regional chapters, was founded in 1974 with the goal to acknowledge the work of notable women in the arts. Luminaries such as Georgia O’Keefe, Louise Nevelson, Lee Krasner, Ruth Asawa, and Amalia Mesa-Bains were among the recipients of its annual Lifetime Achievement Awards. Bernice Bing received one in 1996, only two years before her passing. She had come a long way since her first foray into the art world, but she didn’t live long enough to experience the eventual wide acceptance of her work. This exhibition thoughtfully honors her talent.