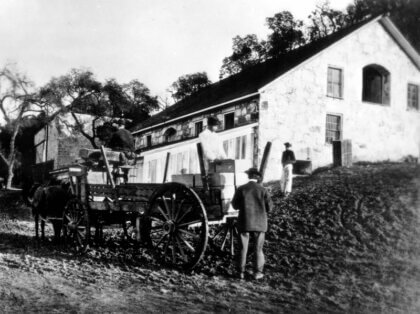 It was over a hundred years ago, in 1908, that my grandparents first came by river boat from Hong Kong to a town in China then known as Canton, now known as Guangzhou, where my grandfather began teaching at Lingnan University. My mother was born there in Canton in 1910, and the family remained in China for 15 years.

My grandfather often spoke of China’s great hospitality, and of their deep appreciation for the work that he did for them. When he returned to California, many Chinese friends visited his home in Berkeley, where I remember seeing Asian art and furniture in every room. My grandfather sometimes talked about the terrible ways the Chinese were treated in America, in stark, harsh contrast to the way his family had been so well treated in China. I remember some of that as a child, and never quite understood why; he once said that it had always been so.

When gold was first discovered in California in 1848, people began coming from all over the world – and among them the Chinese. At that time war, famine, and a poor economy in southeastern China brought many men to Gold Mountain to seek their fortune. Within five short years, 24,000 young men, mostly from Canton, had arrived in California, and signs of racial conflict were beginning to be felt.

The California legislature passed a heavy monthly tax on Chinese miners, and so many left the goldfields to work in homes – where there were as yet few women – as launderers, cooks, and providers of child-care. Others went on to work in the hazardous quicksilver mines, established some of the first commercial fisheries, and drained swamps to create farmlands for their owners.

Ninety percent of the labor that built the railroads was Chinese, under harsh and dangerous conditions, where many died; and so they were permitted to remain in California, yet with increasing discrimination and decreasing opportunities. After the railroad was built many returned to China, but many others stayed behind to build the structures that we find here in the Valley of the Moon today – the stone walls, the great stone barns, and the fine old homes.

Count Haraszthy, widely known to be the father of the wine industry that began at Buena Vista, right here in Sonoma, hired a hundred Chinese workers from San Francisco to prepare his land for the cuttings that he brought from Europe. They tended his vineyards, excavated the deep tunnels designed to store his wines for aging, built his press house and wine cellar, and made his wine under his direction.

When the wife of Sonoma Valley pioneer Joshua Chauvet died of pneumonia in 1876, a Chinese worker for him named Moon raised Chauvet’s two sons along with his own son, Young Moon. Young Moon grew up working in Chauvet’s winery, and became recognized as an experienced, expert winemaker and brandy distiller, whose work gained international attention and acclaim.

Although there was still extreme prejudice against the Chinese at the time of his death, Young Moon was so highly esteemed that state senator Herbert Slater delivered his eulogy, and he became the first Chinese to be buried in the county cemetery – a “Christian” cemetery that, until then, had prohibited burial of the Chinese.

An elderly woman from Canton once stopped by my cabin at Jack London Village, up near Glen Ellen, to see the buildings her great-grandfather had helped build. We stood together at the stone foundation of the Chauvet cellar there, her hand resting on the stones, and talked about his life here in California and his eventual return to China, a wealthy man there for his labors here.

In an 1877 congressional report, a local farmer named John Hill testified that he believed the cultivation of grapes, by this time the principal industry of Sonoma Valley, “would have to be abandoned if it depended upon white labor… I believe if it was not for the Chinese labor, hundreds of people would be entirely ruined.” In 1882 the New York Times ran an article on the anti-Chinese protests being increasingly heard in the west. This movement evolved into a wide boycott, setting the stage for the infamous Chinese Exclusion Act.

When the final California Constitutional Convention was held in the new state capital of Sacramento in 1878, anti-Chinese delegates openly admitted they despised the immigrants because they were smart and worked hard. As one Chinese worker recalled, the Chinese “were persecuted not for their vices but for their virtues.”

“The Chinaman is the result of a training in the art of low life,” countered delegate John Miller.  “Our civilization has bred our people to a certain style of life, which to give up is to surrender all that makes life worth living.”

Finally, on December 9, 1878, Sonoma regional delegate Charles Stuart spoke up. “I have been a patient listener in this Convention,” he began, “and I have heard what was said with a great deal of instruction – sometimes; and sometimes with disgust and disappointment.”

The problem, he pointed out, was not that the Chinese were racially inferior, but that white men did not want to compete: “White men we have plenty of here,” he said, “We have thousands and tens of thousands of white men traveling this State and the United States, voluntary idlers – not involuntary. We have a class of so-called white laborers that have never worked, never intend to work, and never will work.”

The delegates discussed provisions forbidding the employment of Chinese, prohibiting them from fishing in California waters, and from buying, holding, or leasing property or real estate.  When the Convention brought all these provisions up for final approval, Stuart rose once more, and spoke long and passionately. His entire speech was recorded for posterity and is well worth reading. He concluded by saying: 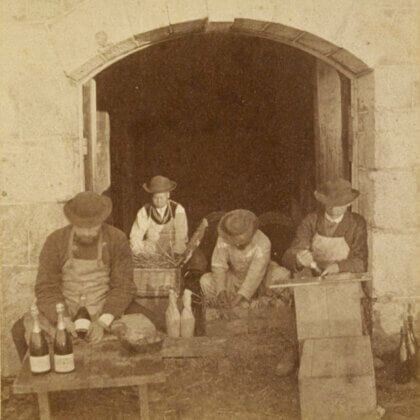 “These men, after being invited to our shores, after building our railroads, clearing our farms, reclaiming over one million acres of our swamp and overflowed land, planting our vineyards and our orchards, gathering our fruits and berries, digging and sacking our potatoes, manufacturing our woolen and other goods, cleaning up the tailings of our hydraulic mines, scraping the bedrock of our exhausted mining claims… thus contributing to our happiness and true prosperity.

“Give to the children of these people (and some of them native born) the privilege of our common schools in return for the school taxes they pay; cease persecuting them by personal assault, to which the law is blind; stop this disgraceful special legislation against them; stop this relentless, heartless, and inhuman persecution of foreigners… and then, and only then, will we do our duty.

“I oppose this article,” he continued, “and I hope every section of it will be stricken out. I beg of gentlemen on this floor to pause, to consider well, and not to be carried away through blind prejudice, through political ambition, or through race hatred.”

His words fell on deaf ears. The constitution was signed, and the abhorrent Chinese Exclusion Act of 1882 was established soon afterwards, signaling the beginning of decades of institutionalized racism.

My grandfather lived to see the Act finally repealed by the Magnuson Act 60 years later, on December 17th, 1943 – three years after I was born – primarily because China had just become a significant ally of ours against the Japanese in World War Two.

It is always sad to see how relationships between people of different cultures can be so distorted by adversarial politics and economies, when it would be far better that they were regulated by wisdom and compassion. It’s for the individual citizen to speak up and speak out, as had Charles Stuart, and to reach out to build a shelter of peace, for peace – like this one planned for Sonoma, in coordination with our sister city in China, Penglai.

It is hoped that – by building the pavilion planned for Depot Park – we will all remember how important it is to include the wide, rich diversity that is represented by each one of us –  so that no one is ever excluded, ever again.