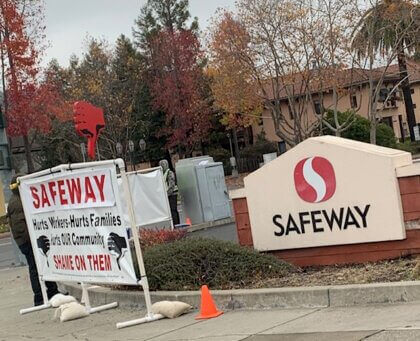 Bay Area Safeway workers are ready to strike, the union head says, if current negotiations — renewed this week after a long ‘cooling off’ period — fail. The two seem far apart on key points.

“Safeway’s current offer and its refusal to offer more full-time work to our members is unacceptable,” said John Nunes, President of UFCW 5. “We are ready to take the necessary steps, including a strike, to ensure that they get a fair contract.”

After more than a year of bargaining and a 95% strike authorization vote, the union says it and Safeway  remain far apart on a new contract settlement that would cover the Union’s 14,000 members who work for the company throughout the Bay Area and beyond, including the Sonoma store at West Napa and Fifth Street West.

Safeway corporate has not commented.

The union’s bargaining committee has canceled its contract with the company and has begun informational picketing at its Belmont store. Rallies in Campbell, Oakland and Pleasant Hill are also planned.

“It It has become harder to live in the Bay Area and with this current offer on the table I don’t see how the company is going to attract anybody to stay and work at its stores,” said Genene Capito, UFCW 5 bargaining committee member and 30-year Safeway employee.

According to a union statement, Safeway’s current proposal includes a wage offer that is less than what was recently approved by UFCW members in the lower cost Sacramento Valley. Other obstacles: No clear pathway to full-time hours (over 80% of workers at Safeway in the Bay Area work part-time), and an unreasonable cap on wages that would make it harder for Safeway to retain workers.

Postponed for a ‘cooling off’ period, talks resumed this week for three days of scheduled meetings.