Why do tenants matter less than landlords? 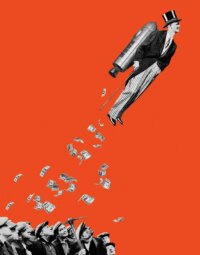 As I sit back and look at our current economic pickle, I wonder, why is paying the rent so sacrosanct? How can people lose their income, get laid off, and then be expected to pay the rent? How can small businesses pay rent when they are shut down and have no traffic to generate income? For that matter, why do landlords have to pay the mortgage to the bank when their tenants have no money to pay rents? Why are property taxes due when people just lost 40% of their investment value?

At what point does the whole thing just break down and we call a complete time out and figure out a better, more resilient way to run the ship and to allocate the benefits? Public banking anyone? When non-payment happens to little guys, why do they get evicted and hung out to dry and airlines get a $50 billion bailout? Corporate welfare in tough times is somehow justified while food stamps are not?

Why aren’t tenants, jobs, and labor just as sacrosanct as property owners and property contracts? We’re all people here with inalienable rights, right? Why has labor suffered such a dramatic fall in protections, while contracts and property rights seem such a bastion of business as usual?

Questions such as these start to zero in on core economic system maladaptive issues. Which are, in my humble opinion, that we have a kleptocratic system where the ruling class, and rigged finance and legal systems set up to serve them, sequesters control of labor and all the monetary and supply chain resources, and then proceeds to gin up false demand, and rip off everyone all the way down the line. Greed and rip-off are reproduced by all the fish in the chain. The rip-off gets greater, more regressive and out of proportion the less money each person has.

The general proposition is that greed by power-grabbers is incentivized; investors bet, gamble, and take risks to front loans; then they charge max interest on the repayment, which causes property owners to charge max rents. In this pecking order, workers are paid the least as possible to minimize the leveraged costs from above. With a personal catastrophe, in usual times, tenants just get evicted and they disappear from town silently, one after the other.

But what of this collective, inequitable compact when rents and payments cannot be made by almost everybody? Like now. The whole system is shut down. The lack of resiliency and backup systems is startling. People are having to scramble to make life work; on one hand we stand on the brink of devolving into old-time mass starvation and chaos, on the other, the business as usual sharks are going to bail us all out? For altruim’s sake?

The cold hard facts. Our economic system, U.S. flavor individualistic capitalism, is and has been like one big highway robbery shakedown, big fish eating smaller fish all the way down the line. This is facile, unsubtle Social Darwinism as rational economic theory.

Self interest is real and rational to the extent that any economic ecosystem depends on exchanges between actors. Self interest however does not stand alone, and is embedded in, and in tension with the cooperation inherent with society, which is our prime adaptation. Society, of which economy is a part, is based on working together. We would never have made it through two million years of nights outside with bulls and lions, if we were simply individuals; no teeth, no claws, not enough strength. Our strong point is our smarts and ability to communicate and work together, that’s why we have the language we do and such a good brain to body ratio. Society is not adaptive if it becomes a vehicle for the few to progressively monopolize resources and parasitize the workers bees and cleaner fish out of any quality of existence.

But parasitize ourselves we do, and hence the phrase homo hominii lupus, man is a wolf to himself.

The only trouble for our current economy is that unlike physics, population biology, and ecology, no physical system can be based on endless, self-interested growth without reaching some kind of stasis point, a carrying capacity point. Human economic systems don’t exist in some kind of fantasy zone where real limits, like entropy and J-curve crashes don’t apply, yet we have acted as if they do exist in such a fantasy zone.

Our current economic system is based on myths of endless resources and growing consumption. These ideas were cooked up by Adam Smith et al when the human population was low, and no one could conceive of an end to natural resources. Before Covid 19 we were heading for a J-curve crash anyway, with the climate crisis as prime indicator #1 and the Sixth Great Extinction as prime indicator #2. Those things are real, science is the real manifestation of our rational capacity! Also real: our supposedly rational aggregate economy has wrought a massive over-extension of human systems, wherein non-scientist Wall Street witch doctors, incentivized by greed, foist animal spirits fantasy mythology on us all, and have about run the aggregate human  societal ship aground.

As our interrelated over-consumption bumps on up and down the chain, not only are we over-extended, the most vulnerable get squeezed first. The risks and costs are disportionately exacted upon those least able to take it. When the ship gets run aground by short-sighted maximization, as Jared Diamond has said regarding the history of societal collapses, all the rich buy themselves is the privilege of dying last. Small consolation.

And now we find ourselves, with the Covid 19 crisis, at an economic and societal inflection point. This is a place with the opportunity to consciously refigure a bad system, to look to spread risks, costs, and benefits more equitably.  Instead of lurching from crisis to crisis, and watching as all the servant class just keeps getting ground under the axle of the wheel of Fortune, we the people could, and should demand the economic channel be changed.

We make the system. We can be rational. We can choose health, equity, and sustainability. The challenge now is for decision-makers to respond to and act on this real need for adaptive change, and to not fall back into business-as-usual justifications for a system that doesn’t produce the benefits necessary for all stakeholders and for the environment. We the people demand a choice for health and equity.

The cure is simple – invert the benefits equation, allocate resources equitably, include everybody, respect the earth’s back 40, reduce population, and enact massive conservation and clean energy programs. Overall consumption will have to be dialed way back, all live with less, and new ways found to live with billions of people and a limited resource base. The old ways are not going to cut it. We need a new paradigm, one that shifts the emphasis off pure self interest (US style capitalism) and moves the needle more to cooperation for species-level survival.

Otherwise we’ll end up like all other collapsed civilizations where massive inequity and overexploitation of resources ran them under. With national and international politics fatally dysfunctional, we’ll have to rely on mostly local measures, and hence it falls to our state, county and city leaders to pave the way. This essay is wind for our leader’s sails. There can maybe be small pockets of sanity that will survive. That could be us.