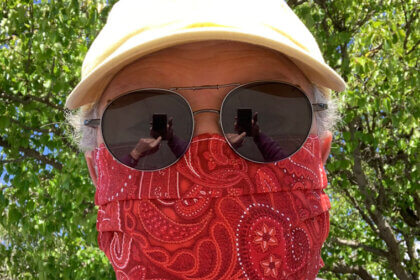 Among the many effects of the Corona virus pandemic, one of the most remarkable is the widespread use of facial masks. Initially such masks were medical in style, the antiseptic-type nurses and health workers wear in hospitals; but before long a cottage industry of mask-making blossomed across America and cloth masks of various colorful materials began to appear. Almost overnight, droves of ordinary citizens took on the appearance of stagecoach and bank robbers.

Facial identity has progressively become an essential element of digital security, and millions of people who unlock their iPhones through facial recognition software now find themselves back in the dark ages of having to enter a pass code to use their cell phone. Masking has undoubtedly put a crimp in CCTV facial recognition as well, making it that much harder for authoritarian regimes to monitor the whereabouts of troublemakers and free-spirited citizens. It’s hard to tell ordinary citizens from career criminals when both are wearing masks.

Culturally, masks once played a major role in various rituals. During the archaic age of magical thinking, shamans, medicine men and members of tribal societies wore masks to represent spirits of animals, demons and gods. When acting out roles in dance or theatrical psycho-dramas, masks were essential; the essence of magical thinking is that the representation of an entity or object becomes that entity or object. The wearing of a mask was not simply an acting job, but an act of spiritual transformation.

Today, although magical thinking still abounds in contemporary form, masks are rarely connected to matters of spirit and more as a source of amusement or entertainment. During Halloween, millions of American kids don costumes and masks to wander neighborhoods in search of the spirit of candy. A useful tool of story-telling, masks are commonly used in comic books and Hollywood movies; characters like Batman and a litany of murderous villains ply their trade behind facial masks. The Watchmen tale, originally published as a graphic novel and later adapted to film and television, is largely about the dangerous but liberating transformative power of masks.

The human face is powerful; babies quickly fixate on faces, imprinting the image mothers’ faces soon after birth. The iconography of two eyes, a nose and a mouth is of such import that most of us easily see faces in ordinary objects like power outlets, imagine seeing faces forming in the surface of a carpet or even the Man in the Moon. For this reason, masks can be both amusing and alarming.

Never in my lifetime have I seen so many adults wearing masks, and if this pandemic endures, I expect that what is now a cottage industry will get corporatized, just like every other trend in contemporary society. If coping with COVID-19 becomes a yearly ritual, we’ll be able to order masks online that feature our own faces printed in six expressions – or the faces of celebrities – delivered overnight. New materials will be developed for masks that are more breathable and feel less claustrophobic when worn. Once good-old American know-how takes flight, masks will become political, social and fashion statements. An entire cohort of children will grow up in a mask culture; how to calculate the psychological impacts of that is anyone’s guess.

I went to the local Post Office today wearing my red bandana mask. I was tempted to hold a stickup, but held up a Manila envelope instead.