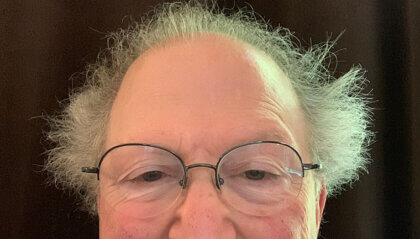 I’m currently sporting a hair style I call the Covid; in other periods it’s been called the Einstein, a wild style ill-suited to going out of the house.

Over my 72 years, I’ve had all sorts of hair styles. In my childhood, a crew-cut was forced upon me by my father, a man with little in the way of hair. Every three or four weeks I’d be sent off to Al the Barber at Heathcoat Corners, where no matter what I requested, the end result was always the same, a crew-cut. Al did sport a good collection of comic books, however, so the time was not a total loss.

When I entered my teens, my father allowed my hair to get longer, but not so that it was long enough to touch my ears. Nonetheless, I had enough hair to spend time after a shower in front of the mirror playing with how it looked; using hair gel which hardened into a rigid shell was fun and let me conduct all sorts of hair style experiments. It was all very amusing.

Once I left home at eighteen, I had the opportunity to let my hair grow, and I did so with a vengeance. By the time I was twenty years old, sheet metal factory workers at a plant where I worked briefly asked me if I was a boy or a girl and threatened to use scissors on me during lunch; by twenty-five, my hair was shoulder length unless the day was humid.

On humid days, my naturally curly hair would turn into the style I called Hebrew Natural, not dissimilar to the Afros popular in the black community at the time. It was about then I met my wife Norma, who has admitted to me that she thought I was cute, but had second thoughts about my hair.

My facial hair, which included a mustache and beard, has also come and gone over the years, and I have rarely been without a mustache. For a while, I trimmed it short, and at one point horrified Norma with a “Hitler cut,” which lasted about twenty minutes. From handlebar to pencil-line, my mustache has been an endless source of entertainment.

I began losing my hair, a la my father, in my thirties, and having donned the attire appropriate to my station in business and on the Sonoma City Council, spent life into my fifties looking pretty trim. My days of shoulder-length with a full head of hair well behind me, by the time I reached my sixties getting haircuts felt like a pain in the ass, so I bought an electric clipper and set about giving myself a buzz cut with a number two adapter; it was the ironic return of the crew-cut in extremis, the bald look.

This pandemic has changed all that. Call it rebellion, reversion, cantankerous old age, whatever, I’m perfectly happy letting my now very grey hair do whatever it wants. On humid days, it’s still very curly, and has returned as a source of amusement in the mirror. When wet, I can brush my sides straight up in a demonic, aging clown look, or slicked straight back like mob enforcer Paulie Walnuts. Upon waking in the morning, it’s Einstein. Once again, my hair amuses me, but after 45 years of marriage, Norma still has second thoughts.