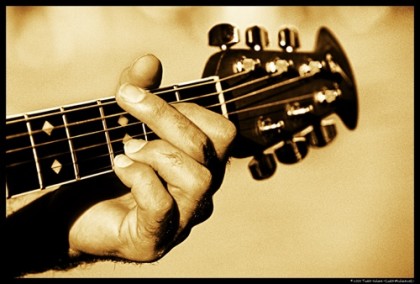 One day I was searching for Jerry Garcia pedal steel videos and ran into a guy playing the Workingman’s Dead pedal steel intro to Dire Wolf. That guy’s name is Josh Yenne and I found out he gives guitar lessons here in Sonoma.

I’ve played guitar for 46 years and took piano lessons as a kid for six, so I had pretty good grounding in theory but knew I wanted to grow and learn a few new things. Before my first lesson Josh asked what I might want to work on. I gave him a hot video of Tony Rice playing Shady Grove, and said I wanted to play like that. Tony Rice is one of the best bluegrass guitar players ever. Why not shoot high?

What Josh found with me was someone who had a certain level of natural talent but had never worked too hard to develop it. I had some dumb ideas and went about things bass akwards. For example, I never wanted to play anybody else’s stuff note for note, I felt that would be fake, copying or something. Josh shot that down right away: no, no, no, the melody is the language, you can’t start improvising before you master the basics of the language.

So after a few lessons to work on my right hand and some finger-picking exercises, plus learning how to play open C and open G major scales, and about the CAGED system of chord shapes and scale patterns up and down the neck, I settled into learning the song Old Joe Clark.

This was getting pretty fun, and I had to push myself to be prepared for my lessons, and I started to memorize stuff I never had before. The new material really opened up the fingerboard for me and I could sense all kinds of potential and new relations of a song’s  one, four, and five in different positions. I could hear classical and fiddle tunes in there, little old me using my mongrel skills to get to a fun new level. Touching the same ground as Bach!

Old Joe Clark is a pretty simple tune. It has two discrete parts. I learned it in open G first, my first time with TABs. Then for extra credit I learned  the melody in all the different  inversions of G. This proved to be challenging, as I had to shift my hand to catch the F many times; that made things tough, even for a simple song. When to shift my hand? Old Joe Clark is evolving, I love having it in my repertoire. I also am fooling around with Little Sadie.

An easier scale exercise is Drunken Sailor. That goes from D Minor to C. D Minor and C can be played in the same hand position, just switch the scales. In every different  position or inversion, simply alternate between D minor and C scales. This is fun. The mind races, the fingerboard comes into focus; the fingers gain a memory of their own. Like riding a bike, you got it. Then I figured out Franklin’s Tower with an open D major to A.

Some days are better than others. I can’t just be totally on it. Got to get warmed up. Josh taught me some good flat picking exercises, how to get into the bluegrass sound from open scales. He’s a real musician. Check him out online.