Food as a core equity issue 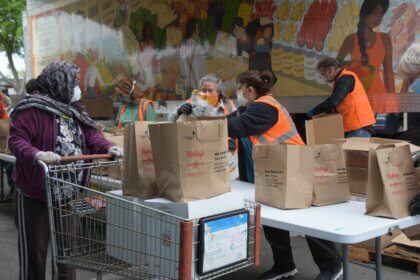 When I first got to Sonoma in 2006, I volunteered at La Luz for the Catholic Charities-Redwood Empire Food Bank food giveaway on Fridays. At first, I was in line getting food myself, as I had no work. After a few times, I met Mario Castillo and he said, why don’t you volunteer? I did, for about a year. First I was the parking and traffic guy, then I moved to the food line.

You wouldn’t think that such an operation had tensions, but La Luz staff were continually having to smooth over issues among the volunteers as to who would or wouldn’t do what. Everybody wanted the gravy and gratitude of handing the food out; few wanted to hump boxes around and do the dirty work. Eventually, I started getting paid work and moved on from free food.

A number of years later in 2016, as I learned more about sustainability, I became very interested in the county food system. This started as a combination of having been on food lines, being aware of high food prices in Sonoma, and being concerned with equity. I attempted to leverage my status as a commissioner on the city’s Community Services and Environment Commission (CSEC), along with Chris Petlock, to lower the Tuesday Farmers Market managers’ fees in exchange for them adding Food Stamps benefits for the public. We did this because it aligned with a 2014 city council resolution to support the county’s Food Action Plan, which has four pillars, one of which is social equity, and dignified access to affordable, healthy food.

The CSEC reduced fee in exchange for social good was shot down by an appeal by council member Gary Edwards with the appeal upheld by a 4 to 1 council vote (Edwards, Hundley, Harrington, Agrimonti, with David Cook dissenting). In the end, the CSEC’s core food justice motive, and alignment with city council goals, became obscured by a lot of tangential issues concerning the market in general.

As far as I can see things have not changed much in Sonoma Valley in terms of equitable access to affordable healthy food. Price is still the critical threshold for poor people, and prices have not come down. Wages have not gone up nearly enough.

Now, the C-19 crisis has laid bare existing social equity issues in the Valley. Essential workers earn crumbs for wages, live paycheck to paycheck, and have no cushion to shelter in place. Back to work and re-opening turns out to be a class-based possible death sentence. In all of this, food remains the most basic need. In this crisis, the Valley’s Food Task Force has worked hard and with goodwill, but government and non-profits remain disconnected from disadvantaged communities at a fundamental level. Why? No POC (people of color) are in positions of power. Advocacy and confronting equity issues head-on is avoided. It’s all white people and white charity money running the show. A dependent, paternalistic relationship is showcased.

Since C-19, as a white person, I’ve had to struggle with this same tension, of being really sympathetic and in solidarity, yet still having a good deal of privilege. I still operate under assumptions and a worldview that makes for a gulf in perceptions, and benefits. Class and race burdens are not hitting me. How to address this disconnect? Basically, I need to move over and let POC speak for themselves, and do whatever I can to make POC agency the priority. This is not about my voice, feelings, or sensibilities. In human relations, if you want to empower somebody, give up pretensions to control, get out of the way, and allow others to have their own voice and agency.

And when in history has any ruling class ever given up power and control just like that? About never. This is a messy power shift that is not easy. In fact, power may have to be demanded and taken, not given, even in this C-19 critical transformation moment.

One big equity issue is city-Springs municipal fragmentation. Unfair representational issues are evident here, as they were to me as a newbie in 2006. Too much power and resources in Sonoma, not enough in the Springs. Recent city-county cooperation has been a good sign. However, for the end game, we need one government here, with district elections, not two captains for the same ship. It’s not right to have classes and races segregated like they are here. The power differential is just not right.

As for food, prices are still unreasonably high and prevent equitable access to healthy food. Prices are rising on meat and dairy as we speak. With the Food Task Force the city has finally shown support for the 2014 Resolution, to support the Food Action Plan — but as charity, not as a proactive move to support the equity pillar of the FAP. Food is still a major piece of a larger inequity puzzle in the Valley.

Enter Food For All. FFA is asserting grassroots agency for the under-represented. It’s a small but critical step in the direction of Springs Latino/ POC self-determination. The status quo is still too content, and all too adept at finding all the reasons why not to share political power. If we are at a critical transition point, and status quo actors won’t really change, what’s left for the underrepresented is to seize power in whatever ways they can. Hopefully, FFA will be the beginning of real district representation, just like I talked with Mario about the food line 14 years ago.