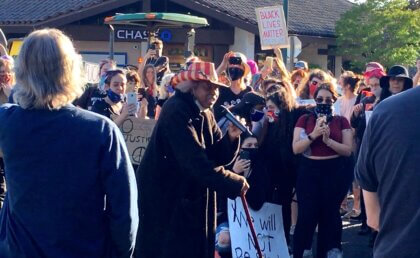 When Misty Browning saw the Sonoma protesters, “young and older, of different colors and occupations, I was thrilled and humbled.”

By Tyler Meloan | For The Sun

The Black Lives Matter movement, though active and existent for years, has gained enormous traction in the wake of the killing of George Floyd by Minneapolis police officer Derek Chauvin. Floyd’s murder, along with other less-publicized cases of racially motivated violence, has sparked large and frequent protests in cities and towns all over the U.S.  calling for rapid and systemic change to a broken law enforcement paradigm.

Sonoma is certainly no exception. While issues of this nature have for years sparked similar protests on the Sonoma Plaza horseshoe, the reinvigoration of the Black Lives Matter movement, led mainly by young people, has resulted in several large peaceful protests in town. Speakers at the events have varied in age and background, but perhaps none offered such a unique perspective as Misty Adana Aleyce Browning, a Glen Ellen resident who grew up in a small Texas town during the height of the civil rights movement of the 1960s. 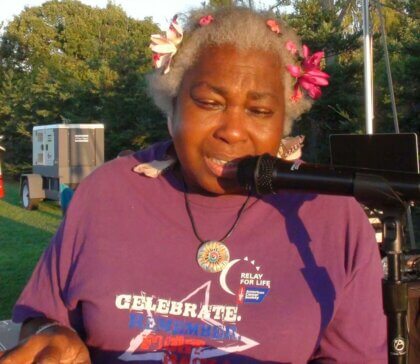 Misty has been present at many of the local protests of George Floyd’s death, expressing her gratitude towards the protesters, as well as exercising her talents as a musician and leading everyone in song. Misty described the moment she came across protesters on the Plaza, saying, “The day I happened to be downtown and see the marchers, young and older, of different colors and occupations, I was both thrilled and humbled. I wanted to kneel before them.” Video.

Misty has had a connection to civil rights-related issues since she was young. Her father knew Martin Luther King, Jr., and as a child she was exposed early on to the terrors of racial prejudice. “Growing up in the South, I heard stories from those much older like seeing the Ku Klux Klan parading along I-35, passing beneath a billboard heralding Dr. Martin Luther a ‘Coon in a Communist classroom’.”  Misty still recalls instances from her childhood that, in hindsight, occurred due to the discriminatory nature of the era and location. “Older now, I am understanding why our elders did certain things. Our parents always went to the grocery stores when the day was at its hottest, to the shoe store when it was dark and near closing.” 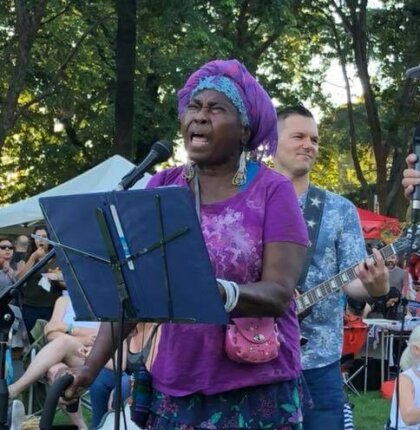 Misty is a lifelong musician, who continues to perform live as a vocalist as well as a guitarist. While music of that time was commonly used as a tool for unifying people behind causes like the civil rights movement, modern music has rarely attempted to do this, and when it has, young folks haven’t embraced singing the songs as a communal vehicle for change during protests.

Contrasting musical eras, Misty says, “Hearing chants and shouts of, ‘No Justice, No Peace’ and ‘Say Their Names,’ although appropriate expressions of their frustrations and acknowledgment, miss out on what the elders gave by singing together.”  She added, “I believe had Black Lives Matter incorporated singing in their gatherings, it would have added a solidified spirit of community, togetherness, and unification. I got the feeling that, although powerful, the message lacked a healing balm.”

Still, Misty is encouraged and inspired by the increased involvement and commitment of young people towards this cause, and, as we all do, recognizes that the fight for equality is far from over, and must be continued. Sharing our voices in songs is, in her view, a key tool that could further this fight for change. In her words, “Music has the power to stop people in their tracks, and open the hearts and minds of the most seemingly heartless.”

2 thoughts on “Ages of dissent”