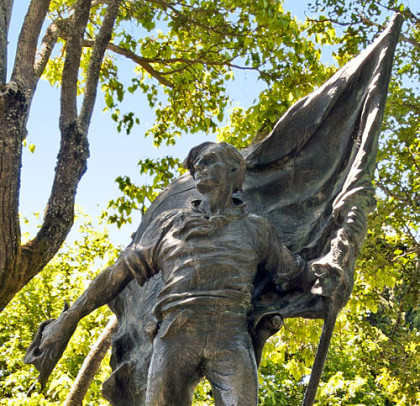 While waiting for a friend on the Plaza last week, I had a chance to study the Bear Flag monument and to contemplate the surrounding context of the Mission, the Barracks, the so-called Servants’ Quarters, the plaque listing Mission-era Indigenous people who died, and the Vallejo statue.

There is an opportunity here to look at Sonoma history in multiple ways. The easy way has been to glorify the white immigrant story as somehow leading straight to today’s glass of wine, and elide the underlying conquest, colonialism, exploitation, and suffering.

The Bear Flag plaque, dedicated by the Native Sons of the Golden West, mentions “freedom from Mexican rule” as a core reason for the 1846 Bear Flag Revolt. If Sonoma was Mexico, how could foreigners come in and assume they could just take over? The fact is, the U.S. has had a long, racist, and exploitive history with Mexico and Latin America. U.S. expansionism rode straight on the back of Anglo-Saxon, Manifest Destiny, exceptionalist mythology.

First the U.S. annexed Texas in 1845, goaded Mexico to “start” the Mexican-American War, and then used the war as a pretext to invade California soil. Fremont and the Bear Flaggers were bit players in this larger drama.

As the U.S. won the war and gained territory from coast to coast, the frontier provided a relief valve where U.S. social contradictions (slavery, social inequity) could be set aside and not addressed. Settlers came and claimed free land and opportunity, at the expense of the existing inhabitants. What transpired was many years of lawless vigilante justice and violent dispossession of lands, now romanticized in Western movies as the cowboy ethos, rugged individualism, exceptionalism, and the American Way.

Indians and Mexicans bore the brunt of expansionism. Blacks were enslaved. Chinese, Japanese, and Filipino immigrants were used as cheap labor akin to slavery, and then got run out on tides of racist Nativism. Latinos and Mexican immigrants, to this very day, inherit the same threads of U.S. bigotry, Nativism, and racism.

This leads up to today where we hear talk of law and order and property rights, and Black Lives Matter supporters are vilified as un-American, as if our collective thievery and brutal past did not really exist. This justifying narrative paints the U.S. as “exceptional” and leads to interpretation, especially with statues, where we get a stilted view that seems to glorify the exploiters and vigilantes.

Spain and Mexico did the same. The Bantu Expansion did the same to the Koi-San people. Israeli settlers do the same to Palestinians and their land. In fact, war, violence, expansionism, and territorial dispossession are universally human. Then the winners make the law and say how great they are.

To put my views in context, as a kid I read every book I could find on Indians. I started out my trajectory in life squarely rejecting the white man’s way. Early 1970s Quaker summer camps sealed the bargain to turn me away from mainstream aspirations. My formal education in the human sciences was colored by social justice values. It’s no wonder I see U.S. history as corrupt, and Sonoma history as corrupt junior, a sequestered white, wealthy enclave. I can’t possibly take a line about how great it is here, or in the U.S.

The Plaza statues should either come down, or be balanced by statues, monuments, and interpretations that tell the full story, not just through the rose-colored lens of self-justifying victors. The scales of justice need to be balanced, debts and reparations paid, and our collective space not dominated by unquestioned, quaint images of past exploitation.

This is an opinion piece. Its views are that of the author.