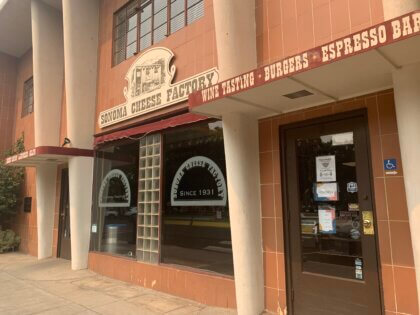 The Sonoma Cheese Factory is open for the first time in years under new owners Sonoma’s Best Hospitality Group, a consortium owned by Ken and Stacy Mattson that includes Sonoma Valley properties valued at $100 million or more.

The Mattsons reportedly paid $3.75 million to the Viviani Trust for the Plaza structure and business. The distinctive 11.4k-sq. ft. building along Spain Street opened in 1945. On-site cheesemaking ceased in 2001.

Helming the new operation will be Casey Thompson, a former contestant on the reality TV show Top Chef. It offers a café, wine bar, specialty foods and gifts, and outdoor seating, all consistent with the current use permit.

A spokesperson for the SBHG says the company plans no significant changes to the building. The previous owner had planned an expansion and remodel, revisiting a permit first granted in 2004, but that had been stalled by a lawsuit.

The high-visibility storefront is the latest acquisition by the Ken and Stacy Mattson Trust, along with a partner company LeFever Mattson. Since 2018 they have purchased some $100 million Sonoma Valley real estate, including Sonoma’s Best deli, the General’s Daughter restaurant and Ramekins Cooking School, Cornerstone Sonoma, the Boyes Food Center, the Cocoa Planet Chocolate Factory, Leland Fishing Ranch and the former Ravenswood Winery property. Their local portfolio includes more than 10 homes, including the compound going up along Highway 12 at Moon Mountain Road.

What ultimately became the Sonoma Cheese Factory was founded in 1931 by Celso Viviani, and moved onto the Plaza in 1945. It was a family operation, taken over by his son Pete. But divisions emerged among the founder’s three grandchildren in 2002, when David Viviani split off a new company, Sonoma Foods. He would go on to sell the cheese manufacturing business and its trademarks, including Sonoma Jack brand.

Pete Viviani died in 2008, and left Sonoma Cheese Factory, through a trust that omitted son David, to daughters Nina and Maria Viviani. For many years the sisters endeavored to make improvements to the structure, at one point presenting plans by the developer of Napa’s Oxbow Market. But when brother David made overtures to help revive the struggling business two years ago, the Trust had no interest.

“Unfortunately, one of our biggest hurdles isn’t from our neighbors, it’s from our brother David,” the sisters said jointly. “It’s not our style to air dirty laundry, but we need to make it clear that our brother has nothing to do with the Sonoma Cheese Factory.”

Now, with the sale, the association with the Viviani name ends after 89 years.

Related: Why I boycott Mattson