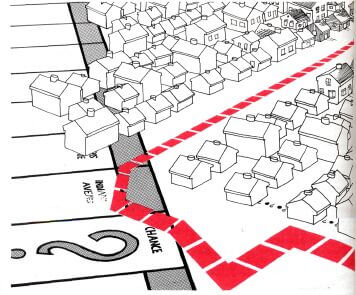 What push and pull factors cause people to move and for some areas to grow or not? Birth rate is a critical driver, plus people’s ability to move for whatever reasons. The Second Great Migration of blacks  from the South after WWII had the push to escape a racist South, and the pull of a better life in the North and California.

The 1960s and ‘70s had white flight to the suburbs, and strip development. Then came the 1980s migration of white suburban offspring to the next great places – the Sunbelt, Seattle, Boulder, Bend, the Bay Area. The people came and came. Freedom and going to the next great place are allowed. Notion of space and frontier are fundamental to US mythology.  Yet more new-comers came to be seen as spoiling things, just by existing, just by being born with colored skin. Herein lies the genesis of a paradox with US freedom and nativism, segregation, and territoriality. .

Contrary to US mythology, in the 1980s Baby Boomer colonists put up walls (urban growth boundaries) and sought to burn the bridge to the birthrate and the hoi polloi. The outcome? Elite enclaves like Sonoma and outlands of underprivileged like American Canyon. Growth and sprawl came to be used as code words for white protectionism.

Sonoma is a fractal of these western and Coastal California tensions that are themselves derived from core US historical contradictions. The US revolution promised freedom and equity but reproduced aristocracy.

White Baby Boomer colonists rode a privileged wave of the Post WWII economic boom. Through legal means, zoning, UGBs, CEQA, and control of city planning, they froze workers and people of color out of the California Dream. In the battle against “growth,” green protectionism threw equity overboard. Growth and sprawl became proxy words for all that would threaten white Baby Boomer hegemony. Growth (new people) would spoil everything, even as the Boomers got their own and spoiled things for the locals.

Sonoma ended up as the “protected” manor house in a plantation economy. The servants are segregated in the Springs, under-represented and under-provisioned, while wealthy Sonoma is overwhelmingly white and has hoarded goods and opportunities. The greenbelt is the wall, the redline – the same xenophobic dynamic as Trump’s wall.

Among the powers that be, this Coastal California protectionist Kool Aid creates a kind of zombie-like conformity among greens and homeowners. It’s kind of like the Stepford Wives. “Challenge the UGB!? That’s ridiculous.” “There’s no connection between equity and the UGB!”

This blinders-on buy-in makes the region super costly and socially unsustainable. An unquestioned allegiance to the paradigm of “smart growth” serves as witting or unwitting cover for wealthy, white, suburban protectionism. The core tenets of this Kool Aid cocktail are: territoriality, preservation, protection, green first, UGBs, slow growth, and dense infill near transit. The dense infill ends up being made impossible to achieve by all manner of NIMBY obstruction, high prices, planning sleight of hand, and CEQA stalling. Green checkmate. This is all in the name of saving the climate, and preserving small town character.

Yet Sonoma commits the most obvious sin and hypocrisy: social equity issues are externalized to the Central Valley and Lake County. Full cost accounting, that should include social equity, becomes a shell game of denial. Lack of vision and leadership hides behind excuses and failure to procure the necessary resources, political will, and vision to have a just society. Affordable housing remains underbuilt while market rate dominates. This growing inequity has happened on the Boomer colonist’s watch.

The combined effect is a UGB green checkmate that excludes all manner of essential workers and renters. This is one reason why the Bay Area has the most inequitable housing in the nation. If there is so much land in the city for affordable housing, where’s the beef? Where’s the climate justice?  How did Sonoma get 87% white? Why is “growth” the UGB bugaboo issue here?

In Sonoma, the sustainability paradigm and its triple bottom line (economy, environment, society) have failed to include a ledger for social sustainability. In a generous interpretation, greens and Boomer colonists are so busy protecting the environment and fighting “growth” and developers that the working class and people of color end up as collateral damage.

Since Sonoma is so out of balance socially, the first thing needed is to make room for displaced and excluded essential people. This is not growth, it’s addressing Sonoma’s equity deficit. Send the Measure W UGB back to have decision makers make more room at the inn. Open the gates! NO on W! Allowing 1% of city land to be easier for Affordable Housing is NOT sprawl.