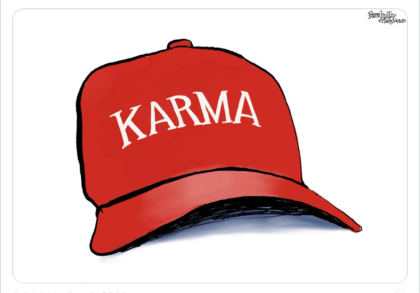 The announcement that Donald Trump has tested positive for Covid-19 has a quality of inevitability. From the beginning of this pandemic, Trump has minimized its health risks, downplayed its severity, boosted quack treatment theories, ridiculed wearing a mask, argued with administration health professionals and generally been hostile to taking this pandemic seriously. Now it’s no surprise that he’s infected.

America’s Shit Show is either the cleverest, most outrageous, plot-thick Hollywood contrivance ever produced, or a real manifestation of in-your-face Instant Karma. As a matter of self-comfort, I’ve been viewing events as a lousy script, which is to say imagining that the Ship of State is just one character in a national reality show that’s emerged from the minds of screen-writing hacks sequestered deeply in a bunker under Times Square. Viewing reality as theatre has the advantage of upping the entertainment value, and newscasts interspersed with endless commercials for air fresheners and Lincoln Town Cars makes sustaining the the illusion easy. But of course, it’s not real.

Karma, on the other hand, is merciless and all too real. Loosely defined, Karma means “action,” and postulates that human reality flows from the actions of mind and body. In this way, our beliefs and the behaviors they fuel create our own realities, these causal realities overlapping in an unfathomably complex array of effects. We are all writing our own scripts, and the probabilities created by those scripts intermingled with the Karmic actions of nature are the sum total of what is.

The coronavirus is Karmic as well, each minuscule individual virus acting out the Karma of its own existence while participating in the collective Karma of the viral mass. It’s not like we haven’t known how this virus spreads; the novel coronavirus depends upon the actions and behaviors of human beings. It is for this reason that this pandemic is not affected by Trump’s bombast, misinformation, bullying, distain for science or political opinion but relies instead upon the simple Karma of human contact.

Epidemiologists advise that the best and only way to deal with the spread of coronavirus is to reduce human contact, and that had the people of the United States been instructed, in no uncertain terms, to strictly shelter in place for three months at the pandemic’s outbreak, the Karmic chain of the virus would have been largely broken. Instead, Trump has tried to cajole and bully his way through a medical crisis, conveying the belief that self-isolation was at best unnecessary and at worst an unacceptable restraint upon freedom, as if self-imposed house-arrest is worse than cardiac-arrest. This has been a colossal blunder, and now Trump himself is suffering the consequences of believing his own bullshit.

I don’t wish Covid-19 on anyone, but in all honestly I am more dismayed by the nearly 210,000 deaths that Americans have suffered than the prospect of Donald Trump getting hoisted by his own petard. It need not have been like this; the opportunity to break the Karmic chain of pandemic events was diverted by the one man with the power and authority to help do so. Instead, he treated this pandemic foolishly, wasting precious time and sowing confusion. Now the Karma of his actions have come into the White House.

In the case of the Coronavirus, Karma’s not a bitch, it’s an asshole.