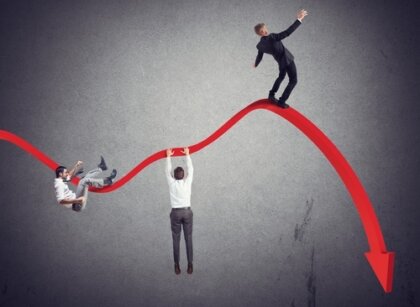 Our economy is contingent on continuous growth, consumerism, and monetary policy that facilitates such growth. Growth is a highly-loaded code word that true believers in capitalism see as good and critics see as bad. Even liberals gain value from and are beholden to growth. One certainty, growth based on natural resources extraction can’t be endless because the earth’s closed system does not have limitless resources.

In capitalism, profits from growth are supposed to be reinvested and trickle down to workers. The operative capitalist assumption is that selfishness has an emergent property of altruism. Yet it doesn’t work that way; we end up with Wall Street and Main Street, a 1% and 99%, repeatedly. As JK Galbraith said, “…one of man’s oldest exercises in moral philosophy… is the search for a superior moral justification for selfishness.”

Many see this all as unfair. Thus, we have socialism as a counter-balancing ideology to capitalism: voluntary sharing is postulated as true altruism. Globally, human systems are struggling between the individual prerogatives of capitalism and the collective needs of the masses. How stupid of us, to fight about integral aspects of a whole system.

The pursuit of growth and consumerism does have deleterious environmental costs, chief of which are the human-caused climate crisis, polluted air and water, soil loss, overfishing, loss of critical biodiversity, and mass extinction.

The conflicting but intertwined tensions between the need for an economy (provision of resources), the social distribution of such resources, and necessary environmental stewardship is what birthed the sustainability paradigm in the 1980s. Sustainability seeks to use our rational facilities to bring economic, social, and environmental interests together under one tent, to forestall societal collapse. A core sustainability need is to account for the bottom two billion people on earth, and the negative consequences of their desperate use of natural resources.

To date, no mass sustainability movement has emerged that can finesse socialist, capitalist, and environmentalist actors under one tent. People don’t seem to be able to de-silo and shift gears. The haves are clinging too hard to what they’ve got.

At the Sonoma Valley level, where does this leave us for “growth?” Some city actors have worked hard to limit growth (chains stores, real estate offices, wine tasting, and hotels on the Plaza) while others have hitched the city’s economic cart to high-end tourist consumerism, with high greenhouse gas impacts and low wages.

We’ve got tensions, workers want growth because it means jobs and survival. Government wants growth for the tax revenue. Environmentalists and some residential property owners abhor growth because it destroys nature and messes up the character of why they bought into Sonoma.

The Springs was allowed by the county to develop without an adequate commercial base to support itself; and now local workers are segregated in a plantation economy with Sonoma as the Manor House. The Valley has two municipal captains for one ship and conflicting local interests create a paralysis where the full costs and benefits of growth become a central issue. As usual, the poor get hung out to dry.

City property owners are known for being protective of Sonoma, defining its small-town character as the essential quality of why they moved here and what they want to preserve. This translates into an anti-growth meme. “Sprawl” is seen as growth, and as an inherent environment destroying evil. Environmental protection becomes a proxy for character protection. Yet Boomer property owners accumulated their wealth through the clear Alpha consumer, planet-killing growth of the post-WWII economic boom. Sonoma’s low-density neighborhoods are the sprawl of the past. Remodeled McMansions are the top energy users of all. Wealth itself equals unsustainable consumption metrics.

The protectionist onus rests on denying more growth, and burning the bridge to anyone else getting what existing stakeholders now have. This is territorial conquest. This is “do as I say and not as I do.” This is NIMBYism; the impulse to protect one’s own and to exclude others. The urban growth boundary is a chess piece in this overall Sonoma NIMBY, anti-growth drama.

But renters and workers need growth to create the social goods so that they too can be included and live a decent life. This means allocating some land and existing stakeholders making some sacrifices. Measure W proposes to make no sacrifice at the city edge. A history of city and Valley NIMBYism indicates that few sacrifices will be made by low-density neighborhoods. This dynamic is what I call the Green Checkmate. The facts are on the ground, plain for all to see.

Environmental and stasis-loving property owners have blocked future social equity in the name of fighting growth without offering a replacement economy or room at the inn to include the essential workers at the bottom tiers of local society. Basically, we have an impossible situation on our hands. And if no one moves to compromise towards the full sustainability paradigm, we’re stuck in endless loops of zero-sum game arguing that goes straight to societal collapse.

Jared Diamond sees all past societal collapses as contingent on two main factors: over-consumption of resources and great social inequity. In Sonoma Valley we keep running up against serious negative manifestations of social inequity yet we are beholden to a capitalist system that keeps creating them. If growth is not the savior, somebody needs to figure out how to change the channel and address the sustainability elephant in the room.

This is an opinion piece. Views expressed are that of the author.

2 thoughts on “Growth and collapse”