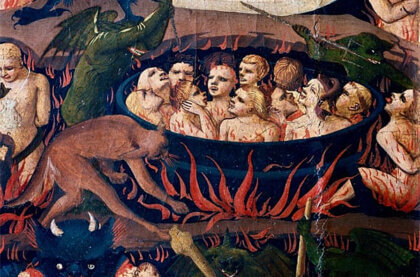 I understand why people invented god. Life is full of surprises, many of them terrible.  Searching for answers about why we suffer is mostly a fool’s errand. Shit happens. Yet despite the challenging uncertainties of living, the world’s religions, whether Christian, Jewish, Buddhist, Hindu or Islamic, are fixated on what happens to us after death, and how those concerns should influence the ways we behave while alive. All faiths share belief in the notion of some form of continuity – as soul, spirit, energy or information – but they differ on how that continuity looks.

When it comes to the workings of continuity, reward and punishment play a prominent religious role. Buddhists and Hindus believe the actions of mind and body while alive affect the nature of reincarnation, or rebirth; virtuous action in this life helps ensure that our future lives will be subject to less suffering, while non-virtuous actions risk propelling us into lower forms of life and hell-like realms of great suffering. Christians, Jews and Muslims have their own particular iterations of heaven and hell. The basic message is that what absolutely matters most about this life is what happens when it’s over.

The idea of salvation – enlightenment, sainthood, satori and the like – is that an opportunity exists to circumvent the risk of future suffering; for believers in such an opportunity, this appears to provide emotional relief from flipping back and forth between hope and fear.

Heaven and hell don’t concern me, but I believe there most definitely is an afterlife: it’s what we call the future. After I die, I won’t be here to experience the future, but those remaining alive certainly will: my children, grandchildren and friends. Accordingly, my actions while alive do indeed impact life after death, the future lives of others rather than my own. This non-theistic belief does not diminish the value of virtuous action; living with each other works best when love, compassion, care, affection, and generosity guide behavior. I view this as humanity’s great strength.

World religions, however, focus their attention on weakness – sinfulness, greed, envy, jealousy, anger and hatred – and properly condemn these because they lead to non-virtuous actions such as theft, deceit, violence and murder, all of which contribute to an unstable society. In attempting to enforce these taboos, ironically, organized religion has often committed the very actions it condemns. In particular, zealous devotion to one particular religion over another still generates murderous conflict and political upheaval; doctrinal differences dominate behaviors rather than commonalities. Religious belief in divine forces itself is not a problem; it’s the forced and often violent imposition of those beliefs on others that causes difficulty.

I personally find preoccupations with an afterlife based on reward and punishment too materialistic; it’s basically “all about me” dressed up in an otherworldly narrative in which my personal future, rather than the future of the world I leave behind, is deemed what’s most important. In this way, I view the idea of heaven and hell as self-serving ideology masquerading as spiritual justification, a convenient reason for behaving well and doing good rather than embracing virtuous action as its own reward. This is an admittedly humanist point of view: that setting matters of chance and divinity aside, we are the masters of our own fate and that of the future we create. Hopes for reward and fears of punishment after death are understandable, but in my opinion, superfluous.

One thought on “After life”