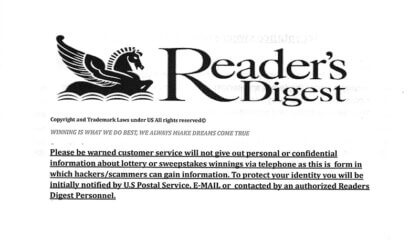 My wife received a phone call and an email the other day announcing that she was a first-place winner in the Reader’s Digest Sweepstakes; $5.1 million was awaiting deposit into her bank account.

Wisely, she made no response on the phone other than to say she’d need to discuss it with her husband – me – before she would do anything. I’d been out and when I got home, she showed me the email and told me about the phone call. My first reaction was like hers – wow! – but was quickly tempered by my natural skepticism. The email was a PDF document of four pages; page one had a very large Reader’s Digest logo at the top, a few website addresses, and text announcing the award; page two was another letter purportedly from the Reader’s Digest Bank, specifying what steps needed to be taken to claim the prize; page three was a document explaining IRS regulations on taxes on such winnings; page four was an acceptance form to be filled out.

My first step was to carefully examine the letter, in which I found typos, a word missing and several spaces between words that were unnecessary. Hmmm. Next, I went to my computer and entered the various website addresses in the documents; none of them connected to a valid or existing website. An examination of the address from which the email was sent revealed it was dodgy as well, ending in @proton.net. In short, it was a scam.

Advice on dodging sweepstakes scams like this are pretty basic. First and foremost, if you’ve never entered a sweepstakes contest, you can’t win. Despite that, the scammers make claims, as they did in this case, that my wife’s name was “selected randomly by a computer ballot system from our senior citizen database.” This is, as we say, total crap. Even though Reader’s Digest does conduct sweepstakes, it never sends notification to winners via email or telephone, but via registered mail only.

Small inconsistencies in wording and spelling are a clue. On one page it refers to a “check” and on another, a “cheque.” Pronouns are missing, as if the drafter of the letter was not a native English speaker. The logos and mastheads on the letters are somewhat pixelated and blurry at their edges, indicating that image software manipulation has been used in their creation. Phrases like “If you receive gambling winnings not subject to withholding, you will need to pay a Government approval tax to your State Treasury Office for an approval letter” are complete nonsense, phony legalese intended to convince recipients that the sweepstakes winner announcement is legit.

It’s easy to see, however, that unsophisticated people unfamiliar with technology are vulnerable to such scams, and many thousands of dollars are lost each year by folks swept up by their excitement and enthusiasm at the prospect of winning big money. Scammers are constantly revising their methods to find ways to rip people off.

Don’t say “yes” if you’re called when asked if your name is correct; sometimes your “yes” is recorded and used as evidence of approval. Don’t give out your bank information, social security number, or any other personal information. Scammers will tell you to keep things secret, and not tell anyone about being a winner; this is to prevent scam detection. Do nothing until you have spoken with someone you trust about whether or not you are being scammed.

2 thoughts on “The sweepstakes winner scam”