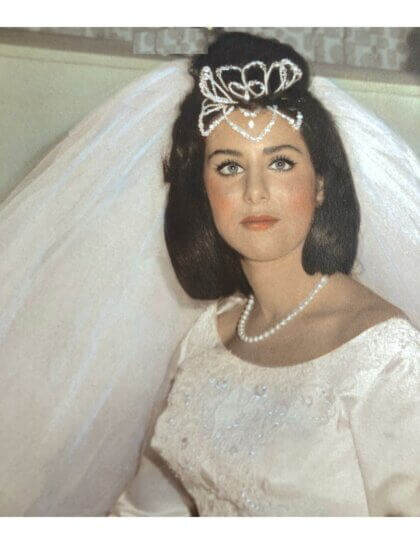 After he broke the glass to giddy cheers
he cradled my face in his hands and
just before he kissed the corners of my mouth
for the cameras and the crowd, he whispered that
he’d run the show from now on . . .that I not forget it.

The band was good, the bouquet tossed and
caught on cue, long-stemmed winter roses
championed home by over-champagned guests. . .

I found the photo in a dusty leather album
my mother kept and left behind . . .
big-eyed bride, boyish hands surrounding
cheeks still round with baby fat. . .

He bought a show dog
though he wasn’t fond of dogs.
He buttoned up my blouses to the chin
brushed the powder from my shine
found my laugh too loud, my prayers too long. . .
I was faulted for the wayward glance
of any stranger on a train.

The day we called the curtain,
wounds well-salted, pennies on the eyes
& all that jazz, he told me that he couldn’t
stay because I didn’t need him near as much
as someone new, never mind
the children . . .puppies really.

He said he was unhappy playing to an empty house.
I thought I was a room in it that needed air.
I will admit I was unhinged awhile,
until I recognized I was uncaged.

Judy was a trial attorney in the San Francisco Bay area for more than 30 years before retiring with her husband to Sonoma in 2006 to write and paint. Her memoir collection, Parking on the Upper Moon, is available on Amazon and Readers’ Books.

Otherwise it Was a Splendid Afternoon

And then its quick sting in my ear.

Sense the nervousness of arteries and blood.

After which I stepped outside

Into the warm spring afternoon

And wandered about in my garden,

Unhinged by a choir of small,

They required to make a song.

I came back to myself and,

Thankful I was not the chosen one,

Mourned the sudden passing of a close friend

By holding a private service for his memory.

Each breath following the one in front of it

In orderly procession until…………

Well, nobody lives forever. Nobody.

Which is why I thought hard

About the departures of colleagues

Sent off to the cemeteries

Before George—and the ones to come,

But how could I grieve with the grip

On the kind of day a pilgrim

Searching for the meaning of life

Would travel months, even years to discover?

How clear the air, sharp the colors

(If you were still alive, that is)

As clouds scudded across the sky

Trees primed to be worshipful

Lifted their boughs to the sun

And roses had the seductive,

That enjoyed being looked at by judges

In his own backyard,

Knowing there would be no more

In the flower stalls for George

And there was nothing I could do about that

Except feel mortal from head to toe

While I waited for the green in the leaves

Of the reverent trees

And the red, orange and pinkish-white,

Blue-ribbon roses to yellow in my memory

Like old photographs left in the sun too long.

But one flashback from that otherwise

Splendid afternoon I know for certain

Will never fade with the effort

Of its having been remembered:

Between his flesh and eternity’s

Was a shortcut I will never forget.

John Field lives in Glen Ellen, California, with his wife Mary. His poems have appeared in the The Atlanta Journal-Constitution, Inkwell, Midwest Quarterly, Poet Talk, and other journals and magazines. A retired English teacher, he received his Master’s Degree in Education from the University of Exeter, England, where a collection of his poems was published by the Bettiscomb Press. 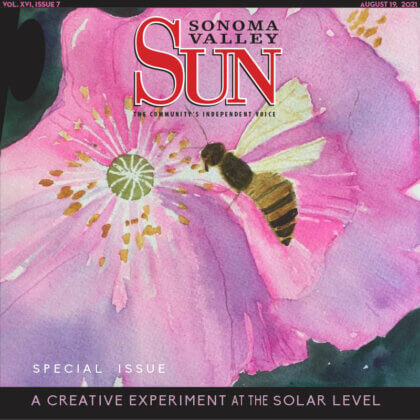