Upheaval and Irreverence — Double Trouble at the SVMA 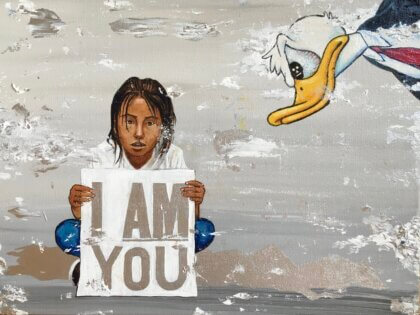 The ‘Double Trouble’ at the Sonoma Valley Museum of Art is Enrique Chagoya and Kara Maria, husband and wife well-known individually as well as together, exhibiting their paintings and drawings in tandem for the first time.

“Enrique and Kara are gifted artists whose work takes aim at the conflicts and paradoxes of our time in unexpected, and sometimes irreverent ways,” said SVMA Executive Director Linda Keaton. “We are pleased to share their work.”

While their styles are different in some ways, their messages are loud and clear. Current political unrest, corruption, immigration disasters, climate change, and other important issues of the day consume their thoughts and drive their art. The exhibition at SVMA includes their large paintings as well as smaller art. The artists collaborate frequently on projects as well, such as the series on the Seven Deadly Sins included as an exhibit.

Enrique Chagoya is an American Mexican artist best known for his mixed-media paintings and prints. Born in 1953 in Mexico City, he moved to the United States in 1977, obtained a BFA from the San Francisco Art Institute and an MFA from the University of California at Berkeley. He lives and works in San Francisco with Kara Maria, and his art is included in galleries across the country. 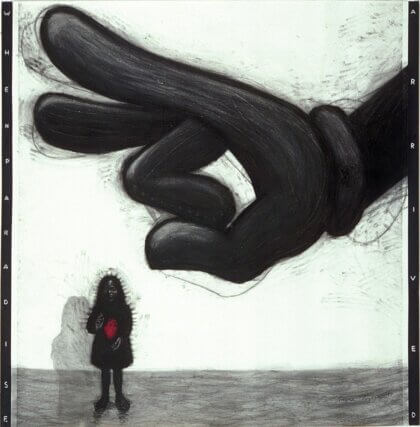 Chagoya’s mixed-media paintings and prints contain unapologetic political commentary of multiple controversial issues, freely incorporating his version of likenesses of Putin, Reagan, Obama, Bush, George Washington, Trump, and others. Some are comical in nature; some are not. His treatment of some of those issues can be dark and meaningful—for good reason—or light-hearted, such as his inclusion of Superman and Mickey Mouse, but all convey serious messages.

At a recent SVMA museum talk with both artists, Chagoya said he finds it remarkable that humans have the benefit of access to all the world’s newest communication devices, but still can’t find a way to communicate with each other. He hopes his visual language will speak volumes to those who want to hear the issues he is passionate about.

Kara Maria was born in New York and moved to San Francisco in 1990, where she obtained her MFA at UC Berkeley in 1998.

She explained at the SVMA event that she starts her paintings with an indistinct colorful base, then adds more color passes after it is dry. Working in acrylics allows her to proceed quickly through each layer. Her work is identifiable by its white ribbons swirling throughout, and by the POW motif placed in strategic areas, as well as frequent use of varying round shapes. Some parts are extremely precise, others are abstract color splashes applied with bold energy and direction.

In her most recent paintings, Maria expresses her concern about the many animal species speeding to extinction on the planet. She said she spent a good deal of time researching the subject because she wanted to know what the species looked like. She leaves a space in each painting to include a small rendering of an endangered animal such as a salamander, condor, wolf, and many more. It’s an interesting viewing experience to find the animal within the highly abstract field. The California Condor appears in “Innumerable Infinite Songs” shown in the photo. 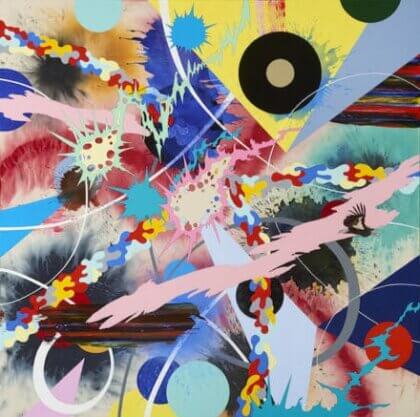 Maria enjoyed an interesting Artist in Residence program in 2014-15 located at the Recology dump in San Francisco, where she sifted through mountains of trash to find inspiration for her art.

More traditionally, Maria’s art is exhibited at galleries and museums across the country, such as the Crocker Art Museum, San Jose Museum of Art, di Rosa Preserve, Cantor Arts Center and de Saisset Museum, among others.

The Artists in Conversation program on September 25 allowed equal time to Chagoya and Maria, who entertained the crowd with stories relating to pictures in the slide show. SVMA has scheduled additional events on October 23 and November 13.