Mushrooms and flying reindeer: the shamanic roots of Santa Claus 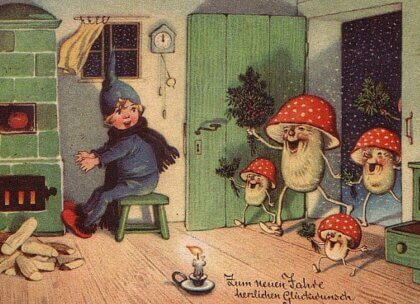 Ever wonder why Santa Claus is dressed in a red and white outfit and drives a sleigh that flies through the air pulled by reindeer? The origins of this imagery have nothing whatsoever to do with Christmas and everything to do with tribal shamanism and the Amanita muscaria mushroom.

The Amanita muscaria is a distinctive red and white-capped mushroom of the psychedelic sort, and like peyote, the psychedelic cactus used in spiritual rituals of some North American Native Americans, the Amanita is at the center of ancient shamanic rituals in parts of Siberia. Siberian reindeer are a primary domesticated animal, and are used to pull sleighs as well as for milk. In addition, reindeer have a role to play in shamanic practices using Amanita mushrooms.

At some ancient point in time, as some researchers aver, Siberian shamans discovered that by letting reindeer eat fresh Amanita muscaria mushrooms, which when fresh are poisonous and cause severe vomiting if eaten by people, but are digested by the reindeer. The nauseating chemicals are safely metabolized and the psychoactive substances excreted in the reindeer urine. When consumed during shamanic ceremonies, the psychedelic liquid produces various mystical states and conditions, including the sensation of being able to fly, and has led to  myths about a red and white costumed shaman flying in a sleigh pulled by reindeer, and distributing gifts to the village by entering the smoke hole at the top of Siberian yurts; in mid-winter, snow drifts often obscure the ground-level entrances. 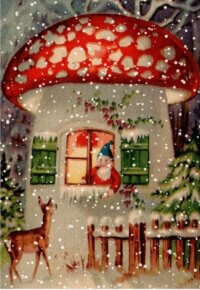 Other ethnologists point to the “shamanic rituals of the Sami people of Lapland, a region in northern Finland known for its wintry climate and conifer forests,” according to an article in The New York Times. Such accounts, “bear an uncanny resemblance to the familiar narratives of Santa and Christmas…” The use of dried and fresh Amanita muscaria feature prominently in Sami rituals.

The mythology of the flying shaman slowly morphed as it worked its way west, through Russia and into Europe, eventually evolving into the mythology of Santa Claus, his flying reindeer, sleigh, and gift-giving. A natural syncretism led to the blending of cultural attributes, while preserving the essential character of the Shamanic myth and costume. Today, Santa Claus is a beloved cultural symbol of Christmas and stands in tandem with images of the Baby Jesus, the Star of Bethlehem, and the Three Wise Men.

Thus, at this time of year we celebrate icons of both frozen arctic and Middle Eastern desert religions, traditions that began a world apart but were joined together by humanity’s common longing for connection.