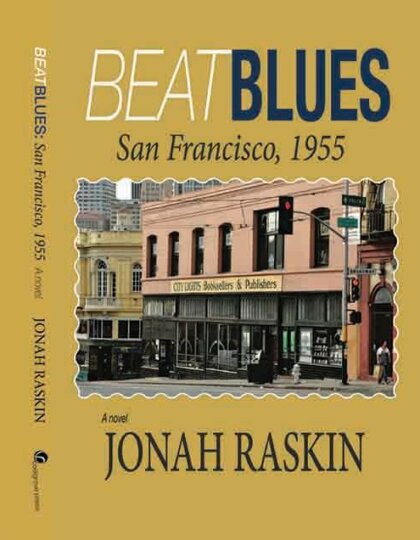 At Readers’ Books on May 15 at 2 p.m., prolific author Jonah Raskin will discuss writing historical fiction using real people as characters, a technique he has explored in several books, including his latest, Beat Blues: San Francisco, 1955. Here, a review of that work by Christian Kallen.

Jonah Raskin has long been a literary fixture in Sonoma County and the North Bay, as a teacher at Sonoma State, a non-fiction writer, a book reviewer in local papers, and wide-ranging freelancer – including as the cannabis columnist for the Sonoma Sun until last year, when he moved to San Francisco.

Even while his movements have been limited by the pandemic, the now 79-year-old writer published the third of his “eco-noir” mysteries, Dark Days, Dark Nights (2020) a sequel to two similarly-titled book published in the previous three years. Fiction writing was a new direction for Raskin: his earlier books included topics like the influence of the West on American literature, the search for B. Traven (author of Treasure of Sierra Madre), pop renegades such as Abby Hoffman, and Marijuanaland, about underground cultivation in the pre-legalization era.

The newest is an historical novel, Beat Blues: San Francisco, 1955 (Coolgrove, 2021). Raskin wrote an earlier chronicle of the time, American Scream about the writing and impact of Allen Ginsberg’s Howl. He returns in fictional mode to the mid-century scene that gave birth to the Beat generation, specifically Ginsberg, Jack Kerouac, Gregory Corso, and Lawrence Ferlinghetti among others. The protagonist, Norman de Haan, is from New Jersey and Army veteran who travels to California in 1955 to immerse himself in the wild west of the country’s literary culture. De Haan gets a job at Ferlinghetti’s City Lights bookstore, putting him as close to the center of the action as possible. 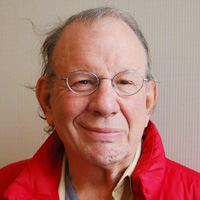 Raskin also finds lodging with a Black family near the Fillmore, and since his head is filled with auditory hallucinations of Lester Young, he’s clearly open-minded to that arrangement. In fact there’s a lot going on in 1955: not only the birth of the Beat, but jazz and blues on every corner, street poets, easy sex, marijuana and Miltown (an early tranquilizer). Racism was rampant – not only the “micro-aggressions” that still haven’t left us, but considerably more macro aggressions, such as the lynching of Emmett Till in Mississippi.

Also in 1955, on the lighter side: the opening of Disneyland. Raskin can’t resist – the manic Neal Cassady (model for Dean Moriarty in Kerouac’s On the Road) takes the wheel of a hot-wired 1953 black Hudson and races into the night toward Southern California, with Norman and mutual girlfriend Natalie Jackson. Their Anaheim adventure barely lasts a day – including drive time – but it feels like a lost chapter out of Kerouac’s book (in Raskin’s, Kerouac is not along for the ride).

Though there’s quite a lot of name-checking and historic minutia going on, the story of the young Natalie Jackson provides a through line. She was one of many lovers to the ever-priapic Cassady, and as a result is in several of Kerouac’s books, notably as Rosemarie Buchanan in Dharma Bums. She fell to her death (after cutting her wrists, or throat, reports vary) on Nov. 30, 1955 – and in Raskin’s book, it’s Norman de Haan who knew her first, and more than once again before he watched her fall.

“Beat Blues is the book I wanted it to be. It tells Natalie Jackson’s story as best as I can tell it,” writes Raskin from Ocean Beach. He said the story first interested him in 1957, when he “heard about the trial of Howl in SF by reading Life magazine and then taking the train to NY and buying Howl in a bookstore and taking the train home and showing it to my friends. It fit into a back pocket.” That would be the first edition, published by Ferlinghetti’s City Lights Books as the fourth in the Pocket Poets Series.

Sometimes memories are like that too, fitting comfortably into a back pocket to be shared with friends. That’s the sort of book “Beat Blues” is, and the sort of writer that’s Jonah Raskin.