Poems and art: a Daily Feast at SVMA 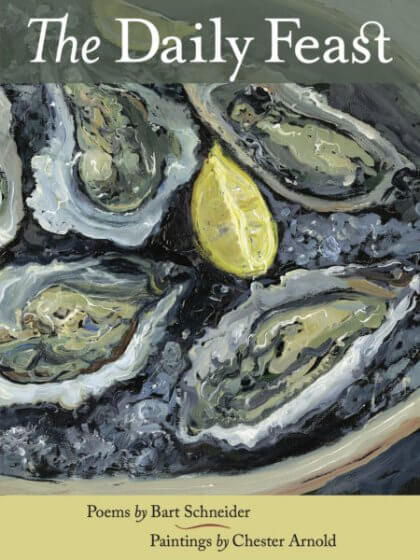 Chester Arnold is what he eats. He’s also what he paints. The Sonoma artist has cooked up a mouthwatering book with Bart Schneider, a novelist, poet and the publisher at Kelly’s Cove, who divides his time between Sonoma and Berkeley. During the pandemic, the two men bonded with one another long distance through poems and paintings. They have just been published in The Daily Feast (from Kelly’s Cove), a post-pandemic buddy book that appeals to the eye and the ear and that touts the pleasures of food.

The two will appear at a Daily Feast book talk, November 30, at the Sonoma Valley Museum of Art.

“Life’s menu drives us and unites us,” Chester Arnold says. “I hope our book will stimulate appetites.” At the height of COVID, he and Schneider cooked and ate at home more than ever before. Now, they have just begun to return to something approximating normal.

Schneider’s evolution as a gourmet was perhaps more dramatic than Arnold’s. At first, the northern California food revolution struck him as self-indulgent. As the editor of Hungry Mind Review, published in Minneapolis/St. Paul, he told me that he “wanted to run a feature on how the Bay Area’s cultural revolution had devolved to an obsession with the palate.” He added, “I soon began to appreciate local farming and see that the farm-to table-movement was an extension of the grape and lettuce boycotts of the Sixties when consumers stood with farm workers.”

Schneider’s poems and Arnold’s paintings are paired with one another page after page in The Daily Feast. They honor Jewish foods like gefilte fish and Mexican dishes like sopa de ajo, plus they tout all-American standards like burgers, tuna fish sandwiches, peanut butter and jelly sandwiches, hot dogs with sauerkraut, plus Parisian favorites like Steak au Poivre, which Schneider’s French-born wife, Catherine, loves. A superlative baker, she shares her husband’s passion for“offal,” as he calls it, including sweetbreads. Except for the peanut butter and jelly sandwiches there are no recipes in the book. For that classic, Schneider suggests “Choose the crunchy jar/ and spread it thickly/ on white bread  or whole wheat,/ but never rye.”

The colorful cover depicts chilled oysters on the half-shell sitting on a bed of shaved ice. Inside in a poem titled, ”Still Life: On the Half Shell,” Bart identifies the oysters as Hog Island Kumamotos. He observes that oysters were “food for the poor, once,/ now a delicacy for the wealthy.” There is little if any snob appeal in The Daily Feast. The authors appeal to people who like to chow down, not to foodies who are obsessed about a sauce or a rare spice. Their book is not just for guys, but for the whole family.

In an afterword to the book, chef Cindy Pawlcyn, famous for Fog City Diner and Cindy’s Backstreet Kitchen, writes that Bart’s and Chester’s book sent her to her own kitchen where she made ratatouille, braised duck legs, plus potatoes steamed and smashed and crisped on a hot griddle in duck fat.

Schneider calls himself “an oven and grill man,” and explains that he “hammers thin and dry rubs” pork butt, and that he often roasts a whole chicken with butter, garlic and cabbage. During the pandemic, Arnold learned to appreciate Dungeness crab more than ever before. Day after day during the summer, he and his wife thrived on the ripe figs from their fig tree, along with mozzarella, tomatoes and locally baked breads. Unlike Schneider, Arnold will work late into the night, painting rather than eating and drinking. “I love quiet hours alone,” he says.

Both men will talk about their book at the Sonoma Valley Museum of Art, just six days after Thanksgiving. You might not be hungry, but there will be plenty of food for thought. Schneider’s poems are a treat and Arnold’s paintings are a delight. Together they’re a feast.