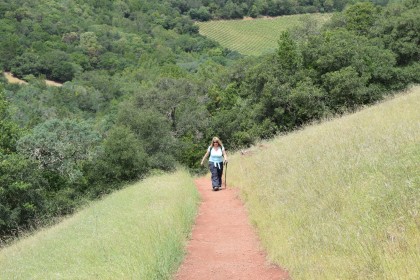 —Teri Shore | For The Sun

The green heart of Sonoma Valley is shielded from sprawl and subdivisions by the Glen Ellen-Agua Caliente Community Separator. It stretches across both sides of Highway 12 from Arnold Drive at Glen Ellen to just south of Madrone Road. It contains 1,400 acres of oak woodlands, vineyards, organic farms, parks and nature preserves and overlaps part of the Sonoma Valley wildlife corridor and the Sonoma Developmental Center.

It is one of eight community separators designated in nearly 17,000 acres of greenbelts between cities and towns in Sonoma County that can’t be turned into housing tracts or shopping malls without a countywide vote. They complement the urban growth boundaries such as in the city of Sonoma, which designate where a city can and cannot develop, by safeguarding adjacent unincorporated land with low density zoning.

The voter protections for community separators that were approved by 70 percent nearly two decades ago expire at the end of 2016. If they expire, a majority vote three of five members of the Board of Supervisors could allow inappropriate commercial development in community separators.

The conservation community is calling on the Board of Supervisors to go beyond a simple renewal of voter protections to strengthen protections and add priority greenbelts to community separators.

“Our initial assessment has found that the largest missing link for community separators here is along Highway 12 to the south toward Sonoma and north to Kenwood and in the Arnold Drive corridors,” explained Norman Gilroy, a long-time resident of Sonoma Valley and former SVCAC commissioner, who now sits on the newly formed local groundwater advisory group and the policy committee for the Community Alliance of Family Farmers for the North Coast.

The Sonoma County Open Space and Agricultural Preservation District has identified several areas in Sonoma Valley and around the county as “priority greenbelts” for community separator designation. These include the rolling grasslands and farms between Sonoma and Petaluma along Highway 116.

A new survey of Sonoma County voters commissioned by Greenbelt Alliance found that 75 percent would definitely or most likely vote “yes” on a potential county ballot measure to renew and expand protections from sprawl for greenbelt lands designated as community separators between Sonoma County’s towns and cities. By the end of the polling period that rose to 78 percent.

As board elections approach, 67 percent of voters stated they would view their supervisors more favorably if they placed a measure to renew and expand community separators on the ballot.

One thought on “Protecting green places between towns and cities”