Can grassroots actions change the world? 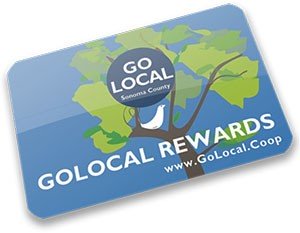 Here in Sonoma County, many people have embraced localization to lighten our carbon footprint while becoming less dependent on Wall Street and giant corporations; permaculture, no-till farming, soil restoration and other organic gardening methods; local banking; slow money and slow food. But in our town, interest in these alternatives seems to be slight. Just what is the problem?

When Philip Beard, a retired German professor from Sonoma State with close ties to PraxisPeace, began looking for the roots of global violence, and he found them in the money system.

His investigation led to the creation of the GoLocal Network of retailers and services in Sonoma County in 2008 and then to the GoLocal Buck, a unique approach to the creation of local currency. Beard had taken his lessons about money from a Swiss economist, Margrit Kennedy, author of Occupy Money, who showed that it was compound interest that created scarcity in the economy. (If you recall, Jesus said the same thing.)

Naomi Klein and others have suggested that capitalism, with its reliance on expansion and growth, is the key obstacle in arresting climate change. But Beard says the problem goes deeper than that. “There’s something wrong with the monetary system,” he says.

“Money is created by banks from debt. When you pay it back, you have to pay interest on it. Where do you get the money to pay the interest?”

“What they’re talking about is price, commodities that are bought and sold,” Beard says. “This conflation of value with price is perverse, and it keeps our money scarce.” The resulting competition and stress drives the kind of corporate behavior that contributes to climate change. “You’re going to take advantage of every resource you have, the cheapest possible labor, the cheapest possible materials, to try to pay the interest on the debt.”

Beard’s response has been the creation of the GoLocal Buck, which gives customers a credit every time they shop at participating retailers. In Sonoma we have 11 participating retailers, but 15,000 members are scattered throughout the county. In Santa Rosa, let us say you spend $30 at Community Market which gives back a three percent credit on all purchases. You now have 90 cents credited to your account. When you visit another participating store, you can spend that 90 cents and also pick up new credit for your current purchase — which you can then spend at Community Market.

It’s a circle: “The credit comes back to the business, which spends it any way it likes. Eventually, you’ll be able to pay your taxes with Go Local Bucks, if the County opts in,” Beard says. This type of system is called “mutual credit” or “cooperative money;” it literally circulates in the community, tightening the web of connections, and passing around a little of the profit, “just for fun”.

It may sound like a small game, but it’s growing. In 2014, $5.6 million was purchased with the card. About 50 member businesses participated in the GoLocal Bucks program; $144,000 GoLocal credits were issued, and $134,000 were redeemed. By September of this year, sales had already reached $5.6 million.

Since banks actually create money in the form of loans, banks have powerful control over the economy. A credit union is a bank that is nonprofit and local, where account holders are members who receive a share in the form of dividends. Instead of sending profits to Wall Street, it keeps money in the community.

Bank manager Jose Alvarez exudes enthusiasm for this innovative model that, he says, has been around for a long time, originating in Europe. The Redwood Credit Union was started in Santa Rosa by a few bankers who came together 65 years ago to establish more stability for their finances. Now their interest rates, says Alvarez, are probably, at 1.94 percent, among the best available. But even more importantly, “we are the community. The money goes back into the community where it supports local business and creates jobs.”

Alvarez enthusiasm is contagious. “I love what I do. I love helping the community.” He feels that GoLocal shares the same values. He did not know about the GoLocal Buck nor how it might be applied to the banking system.

Other GoLocal members are also enthusiastic. Says Cory McGuire, a realtor with Terra Firma Global Partners, “It mirrors our value set. If I’m spending money at Andy’s (in Sebastopol), I know that the bookkeeper is local so the money she earns will be spent locally. It helps to create the vibrant communities we all hope for.”

Christian Cartano, Farm Manager of Paradise Farms on Highway 37, appreciates the networking of GoLocal. “When you see all the members of GoLocal in the room together, you really get a sense of what is truly local.”

But they didn’t know about GoLocal Buck either.

Tom Conlon is CEO of GeoPraxis, an energy efficiency research company, and executive director of Transition Sonoma Valley. I asked him to share his insights on our town’s response to economic innovations that might have a positive effect on our carbon footprint.

A native Sonoman, he explained that during the 70s the trend to grow grapes helped insure passage of the Greenbelt, which stopped projects similar to Temelac from spilling across the entire valley floor.

By the 1990s, people began to notice that Sonoma looked significantly different from all the cookie cutter subdivision communities, Conlon said “As a result, truly wealthy people who had made their money elsewhere began to visit, and then return…Many have personally benefited from lifetimes of hard work and savings, enjoying all the benefits capitalism makes possible. It should come as no surprise that they are reluctant to downsize or abandon their relatively comfortable lifestyles.” But they are receptive, Conlon feels.

“I think most local folks here are biding their time, seeking reliable information amid all the hype, and trying to figure out which elements of this ‘sustainability’ trend they will ultimately incorporate into their highly cultivated lifestyles and businesses.”

Perhaps they are skeptical because more keenly aware of the limitations of localization. As Terry Garrett of GoLocal acknowledges, “Food and beverage services can do well, but we’re not going to be making trucks in Sonoma County. We can’t grow spices here either. Or tea. Once you start thinking about actual products, the limits of localization jump out at you.”

Georgia Kelly started Praxis Peace “to look at the steps we need to take to make peace,” which led her to examine innovative economic alternatives. Economic interests are what drives wars, she says, and block significant solutions that already exist to combat climate change.

Is capitalism compatible with sustainability? “That’s the question Naomi Klein raised in her book, ‘This Changes Everything,’ reflecting growing concerns that mandatory growth and expansionism powered by fossil fuels is what is devouring the planet,” Kelly said “Any economic system that requires endless growth is like a cancer.”

Kelly prefers cooperatives to the capitalist model, pointing to Alvarado Street Bakery in Petaluma as an excellent example. It’s owned by workers, who have job security and a living wage; ingredients are organic and 70 percent of its energy comes from rooftop solar. “All the things that make life good and sustainable, they are doing.”

We don’t have anything like that here in Sonoma Valley.

Sonoma is a tourist destination, which, Kelly says, has made the economic focus different. “I think there’s too much emphasis on tourists. Quality of life for residents is becoming lower. We have too many wineries. Twenty-two tasting rooms on the Plaza. Enough is enough.”

A bigger problem with tourism is that it is another form of dependency on other communities’ wealth. If tourists stopped coming to the Sonoma Valley for wine, what would happen to our economy? Touting the wine business and tourism as “local,” as the Chamber of Commerce and winery greenwashers in general tend to do, obscures the climate impact of an economic base that depends largely on wealthy outsiders driving into town and spending their money here.

But there is an alternative economy operating here, Kelly points out, one that needs to be extended. People grow vegetable gardens and share what they have, putting the surplus out on the front porch with a cup for payment. This system is indigenous to traditional farming communities; it could well come back in force during a crisis.

“We may need more of a hybrid system, one that doesn’t require making more money all the time. The capitalist mindset is not necessarily part of human nature,” she feels; “it’s part of the culture, what the culture brings out.” Mondragon cooperative in Basque country is an even more stunning example of a different expression of human nature, where “happiness is the goal, not wealth.”

“Getting people to change is the problem,” Kelly says. “We’ve up against economic interests that run the show. We have to work on both fronts, the government and the grassroots.”

We have to work hard, she said, to turn things around. It won’t be easy. “With all that we’re up against, I don’t see any reason for optimism.”

In less than two weeks, representatives of governments from all over the world will meet in Paris under the auspices of the United Nations’ Committee on Climate Change. While leaders appear to be more amenable to reducing atmospheric carbon, action has been slower than the accelerating symptoms of climate change. The warming seas are turning acid, the glaciers are melting, sea levels are rising, and droughts have lead to starvation and wars in Syria and Africa, or horrendous fires such as the Valley Fire this summer, where burnt and eroded topsoil will end up in creeks.

All nature’s systems appear to be reaching panic levels, including our own systems, and fear of global collapse could be what’s driving Trans Pacific Partnership, a proposed treaty that if approved this spring, will allow corporate capitalism to overrule national policy with potentially crushing effects on labor and the environment.

Yet we have strategies for arresting climate change. At the Solutions Project (solutionsproject.org) Mark Jacobson has shown that we can provide all our energy needs from alternative sources by 2050. Soil regenerations projects have the potential to draw down significant amounts of carbon from the atmosphere back into the soil. We can solve this problem. A People’s March for action on climate change will be held in Oakland on November 21 calling for a turning point at the Paris conference.