How small loans are making a big difference

Every small business owner knows that it takes money – for equipment, for rent, for upgrades – to make money. But without an initial stake, it’s hard to get established, which means it’s hard to get a bank loan.

Philanthropist Simon Blattner, a supporter of La Luz Center, figured it was time to give aspiring entrepreneurs a better chance to break that cycle. He and his wife Kimberly, also a board member, pledged $50,000 to start a low-interest loan program to help grow small business in the Valley.

“I got it to my heart right away that this was one of the ways to level the playing field, by offering significant opportunities through business and economic development,” said Blattner.

The maximum loan, like the one to the Picazo Café and Deli to help update equipment, is $10,000. La Luz administer the program, and Exchange Bank handles the actual loan process and paperwork.

Without the guarantee, the applicants, with little to no credit history and collateral, would likely not qualify for a regular bank loan. They probably would event try. But with the La Luz guarantee backing them up, they undergo the process with confidence, said Barbara Hughes, former executive director of the Community Foundation Sonoma County who helped formulate the loan program. It could be the first step in building a strong credit history. 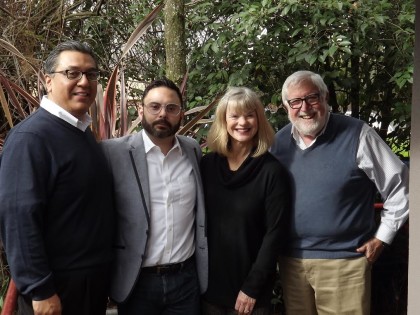 So far, in addition to the cafe, loans gave been given to a seamstress, an auto body shop, a barber and a wholesale baker. The loans, even one for $2,000, become an investment in keeping those small businesses alive in the Springs and beyond.

“Yes, they are small loans,” said Blattner, “but they are important steady steps. People need credit and the chance to build it, and if a local vendor or sole proprietor can’t approach a bank then how in the hell are you going to manage a business?”

The impact a simple loan is profound and makes a world of difference. “I am so grateful,” said Cynthia Owings of Cynthia’s Scones. Just a few thousand dollars has given her the ability to not only continue her homegrown baking enterprise, but to expand it.

“The money we received is helping us to take on more orders for more scones,” she said. I now have clients Healdsburg, Santa Rosa and all the way into Marin.”

She hopes to leave the community kitchen café on West Napa next to the bicycle shop and continue to grow. “But I will not have a café adjacent to the facility. I want to have an industrial (bakery) kitchen somewhere in Sonoma if possible. One that will accommodate the growing amount of orders for scones and that we can deliver from.”

The architect-turned baker has become more business savvy since the days at home baking scones and pies with the kids when they were little.

The loan through La Luz has given her he ability to take charge of her business. “Being in one’s own business is hard work, but it is very empowering.”

One primary mission of La Luz is to be a catalyst for change in Sonoma Valley through financial security, said La Luz Executive Director Juan Hernandez. That means implementing services such as the microloan program to make sure that local businesses, and owner families as well, do not get pushed out by gentrification.

“What we have seen happening in neighborhoods in The City and other places is frightening because it undermines and then displaces the community that is already there,” he said.

Blattner pointed out that he has always believed in helping people to grow through business. As he said, “back in 1968 I formed the San Francisco Local Development Corporation. I basically prepared businesses to be introduced to the bank.”

“This is pretty much what we are doing now, on a smaller scale, only back then it was really hard,” Blattner continued. “Working with people and ideas that the banks considered ‘un-bankable’ was a setback.”

Blattner pointed out that all five micro-loans given out so far, through La Luz Center are being repaid on time and on schedule. “Kimberly and I hope that this effort will continue and grow,” he said.

For information about lending for bad credit