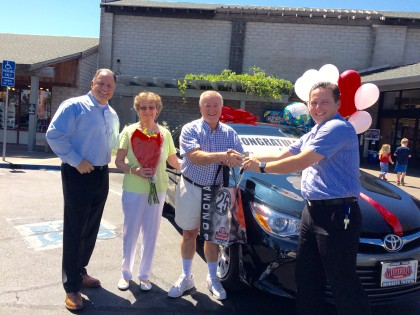 Sonoma’s Allan Fisher, second from right, and his wife Sharon were the lucky winners in a Lucky Store contest for a new car. Awarding the 2016 Toyota Camry LE are Alex Macksoud, Lucky Supermarkets senior director, and Chris Niehage, the Sonoma store manager.

Customers from 69 stores throughout Northern California were automatically entered into a sweepstakes for every $10 purchase of certain promotional items.

The contest celebrated the 25th anniversary of Save Mart’s partnership with Sonoma Raceway where the Toyota/Save Mart 350 NASCAR Sprint Series Race is held every year. The Save Mart Companies is the parent company of Lucky Supermarkets.